Native America's traditional apothecary Wild Cherry Bark is a medicinal herb derived from the black cherry tree that has been used for centuries as an antiviral, antibacterial, vasorelaxant, expectorant, and decongestant. WCB can significantly aid the removal of mucus from the lungs boosting the lymphatic system. Rich in minerals Zinc, Iron, Calcium, Magnesium with Phytochemicals Quercetin and Kaempferol. 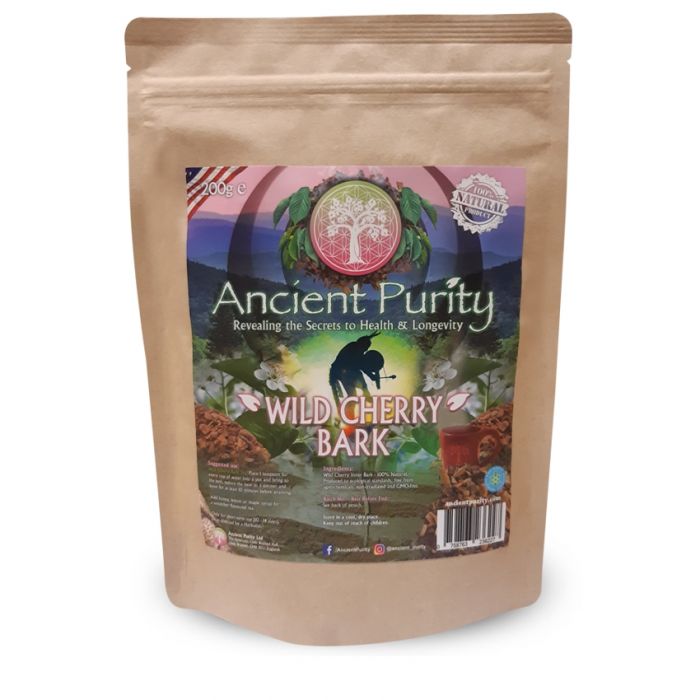 Wild Cherry Bark was actually listed in the US Pharmacopoeia between 1820 - 1970 as an antitussive and a sedative but it was used by the Native American's for hundreds of years before hand. Many tribes including the Cherokee, Menominees and Chippewa all used this herb as regular part of their traditional medicne. According to the Field Guide to Medicinal Wild Plants... American explorer Meriwether Lewis suffered from painful gastric upset, with no solutions he was suddenly well and on his feet the day after being ddrinking the Wild Cherry Bark Tea.

Historically the Native Americans used the inner bark to combat diarrhea, internal worms, lung issues, Poultices of Wild Cherry Bark or the Root had been proven useful in fixing various skin problems and even sped up wound healing. The Chippewa Tribe were known to apply a Wild Cherry Bark poultice to burns, cuts, wounds and ulcers. The Tribes of America would use tea brewed from the inner bark of the Wild Cherry Tree to help assist with ailments, while over in China, ancient Chinese Herbalists used it as a cough medicine. These days Wild Cherry Bark can be enjoyed on its own just as a nice herbal tea or for its various medicinal reasons. Of course the cherry tree has multiple variations all over the world, you may know it for the delicious fruit and beautiful flowers rather than for its bark, but it's the bark that is the part known to contain the most healing power. This is a Tea for the Great Outdoors, it gives, it's part of the Wilderness, not really a comfort tea. 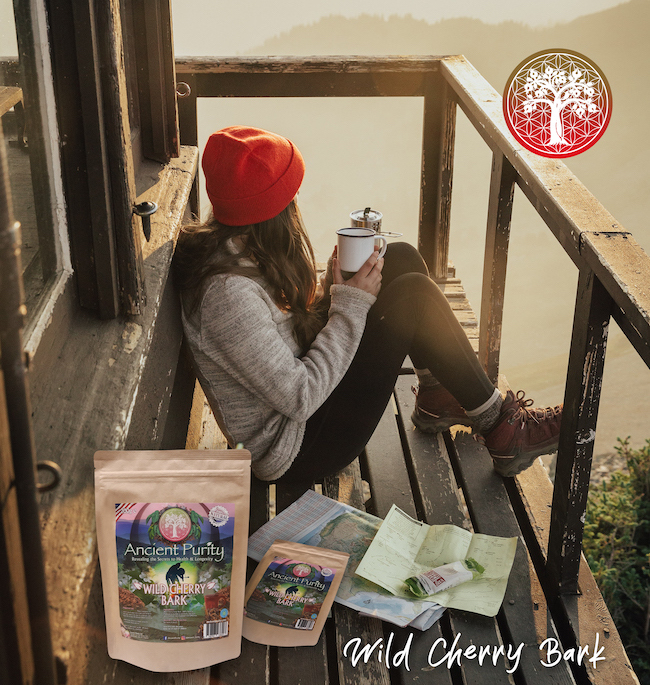 Wild Cherry also known as Black Cherry has so much to give but lets look at what some respected people have written on it. Harvey Wickes Felter, M.D writes 'Wild Cherry is an excellent sedative and tonic, quieting irritation of the mucosa, the nerves, and lessening violent cardiac action dependent upon weakness. When a tonic and sedative is desired that will not unduly excite the circulation, Wild Cherry is a most useful drug. As such it may be used in atonic dyspepsia, and in convalescence from fevers and inflammations, especially after pleurisy, pneumonia, and influenza. While the syrup is an effectual and popular preparation, the cold infusion is better for these purposes.

Wild cherry in syrup is an admirable sedative for cough, acting much like hydrocyanic acid and even better, besides it is more controllable. For the cough of phthisis (i.e. pulmonary tuberculosis or another such wasting disease of the lungs) it is one of the most satisfactory agents, and the syrup is in common use as a vehicle for other cough remedies. In phthisis it not only relieves irritation and cough, but it gives a certain amount of power, and restrains sweating and diarrhoea. Wild cherry is very efficient in uncomplicated palpitation of the heart, and where digitalis is required it lessens the irritative action of the latter upon the stomach. Wild cherry would be more valued if properly prepared. The cold infusion (sweetened, if desired) should be preferred; boiling temporarily destroys its value, and unless a good quality of bark, carefully preserved, is used, the syrup may have little value'

Let the Wilderness Guide You 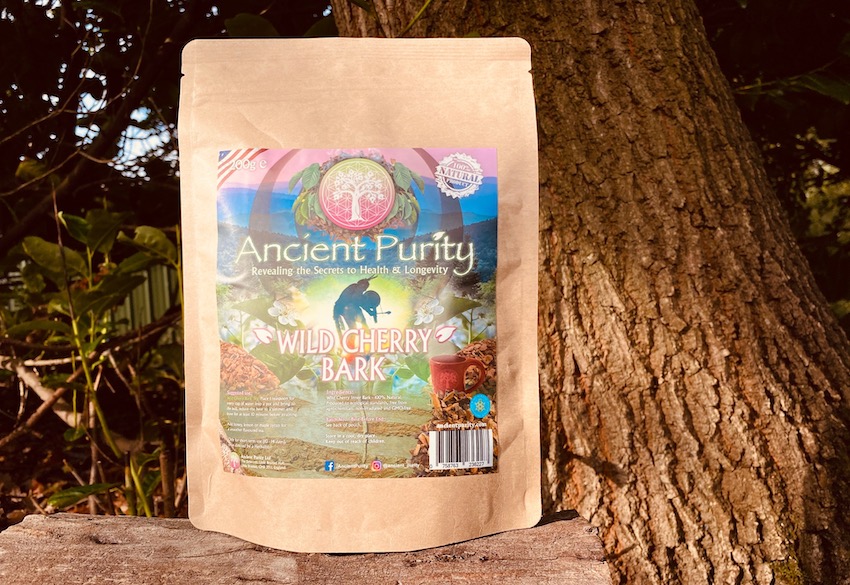 'The tonic influence of Wild Cherry is more markedly apparent when it is administered in disease of the respiratory apparatus of a subacute or chronic character. It is not given during the active period of acute cases, but is of value during the period of convalescence.

It is a common remedy in the treatment of chronic coughs, especially those accompanied with excessive expectoration. It is valuable in whooping-cough. The syrup is used as a menstruum for the administration of other remedies in this disease. It is excellent also in reflex cough—the cough of nervous patients without apparent cause.

The syrup may be used persistently in phthisis, for the administration of many other agents which seem to be indicated during the course of the disease. Wild Cherry is popular in the treatment of mild cases of palpitation, especially those of a functional character, or from reflex causes. Palpitation from disturbed conditions of the stomach is directly relieved by it'. 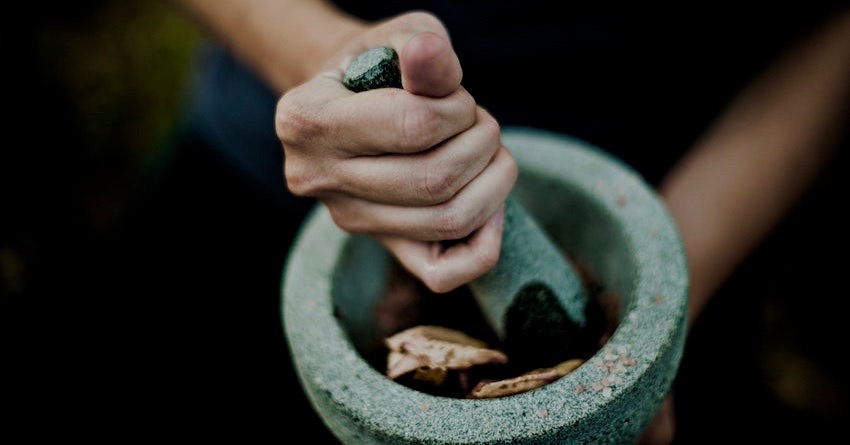 Our ability to cough is a vital, even life-saving function, but it is a most blunt instrument and it can be set on full throttle by the tiniest of particles in the lungs. Likewise, often long after an infection has been resolved, there can still be a continual signal to the brain saying, there is something in here and you have to cough it out, no matter what the cost. It's possibly toxins left over by an infection, or waste products from the immune system that have been left on the battlefield, or damaged tissues in the lungs or bronchial tubes. It can even just be a state of hypersensitivity left over from the process of infection and inflammation. However, the cost of keeping coughing when it is no longer essential can, sometimes, be too high, and when the person gets exhausted by the coughing itself, they can become vulnerable to other, potentially even more serious problems. Wild Cherry Bark has historically been used against coughs and other respiratory issues. The Inner bark possesses natural expectorant qualities meaning that it can help to loosen phlegm/mucus from the respiratory system.

Wild Cherry Bark Tea can help you expel this phlegm or mucus and clear out the bronchial tubes allowing you to breathe far more comfortably. Many people have traditionally used Wild Cherry Bark Tea throughout the years to treat a wide variety of other respiratory conditions. It has been used to treat bronchitis, tuberculosis, asthma, catarrh and scrofula. Along with its expectorant properties, Wild Cherry Bark has antitussive qualities and the ability to suppress coughing very effectively and quickly. People with chronic coughs and nervous coughs may well benefit from its use. Because of these excellent natural abilities, Wild Cherry Bark Tea is often used as an ingredient in commercial cough syrups, lozenges and drops. Wild Cherry Bark contains cyanogenic glycosides that are hydrolysed in the body to glucose, benzaldehyde and hydrocyanic acid, also known as prussic acid. Prussic acid is quickly excreted by way of the lungs where it first increases respiration and then sedates the sensory nerves which generate the cough reflex.

Breathe, Breathe in the Air 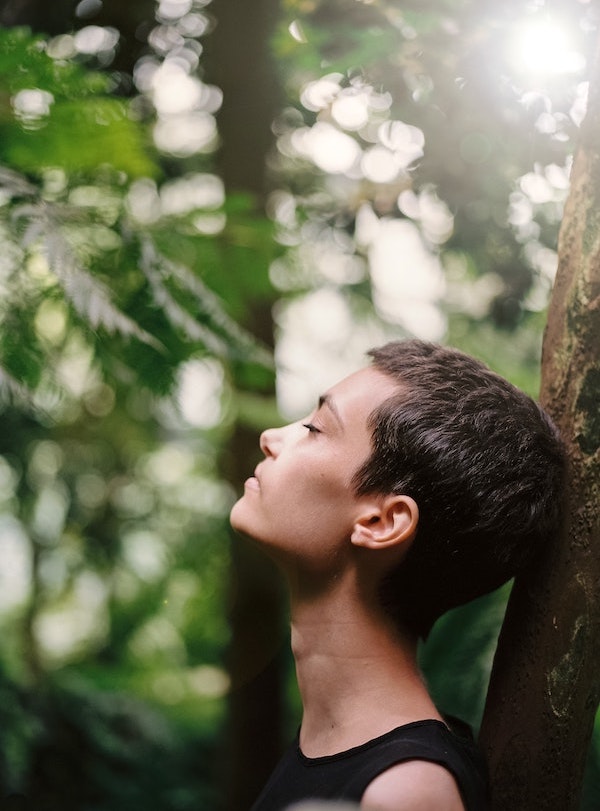 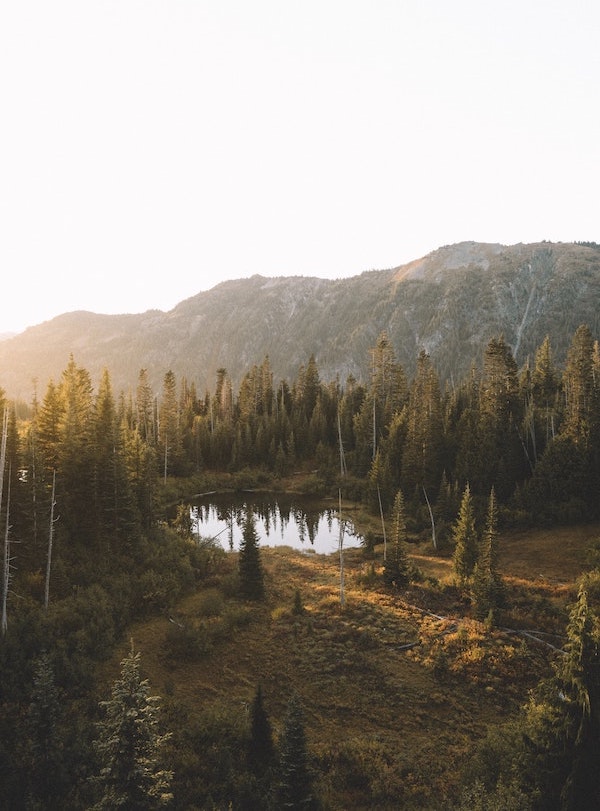 So as we have talked about how ancient and established amongst tribes the use of Wild Cherry Bark is, lets explore one specific function of this incredible tree bar. Getting information and views from the ancient world about the use of Wild Cherry is difficult, information is verbalised rather than written down but we know that Wild Cherry Bark has long been recognised as a Herbal Remedy for cardiac weakness, especially if this issue is accompanied by a chronic cough, palpitations and high blood pressure. Renowned Herbalist Matthew Wood says... "Wild Cherry Bark acts upon the cardiovascular system, equalising the circulation and reducing the irritation and congestion which would encumber the heart. The combination of sweet and bitter indicates a remedy that is especially nutritive, as both these flavours stimulate the secretions of the mouth, stomach and digestive system.

Bitterness in Herbs is associated with the heart and circulation as well, since it reduces irritation and fever. The nourishing influence indicated by the sweet flavour is directed, as it were, towards the heart. This is joined by the astringency, which also tones up the heart.  Prunus serotina not only reduces irritation but nourishes, tonifies and strengthens the heart muscle. Wild Cherry is the American Indian version of Crataegus (Hawthorn), which is also a member of the Rosaceae family used in heart and digestive problems.” In Traditional Chinese Medicine, Wild Cherry is indicated where there is 'heart fire', consisting of such symptoms as palpitations, thirst, sores in the mouth and tongue, mental restlessness, agitation, feverishness, insomnia, rapid pulse, hot and dark urine and a swollen, yellow-coated tongue with a red tip. 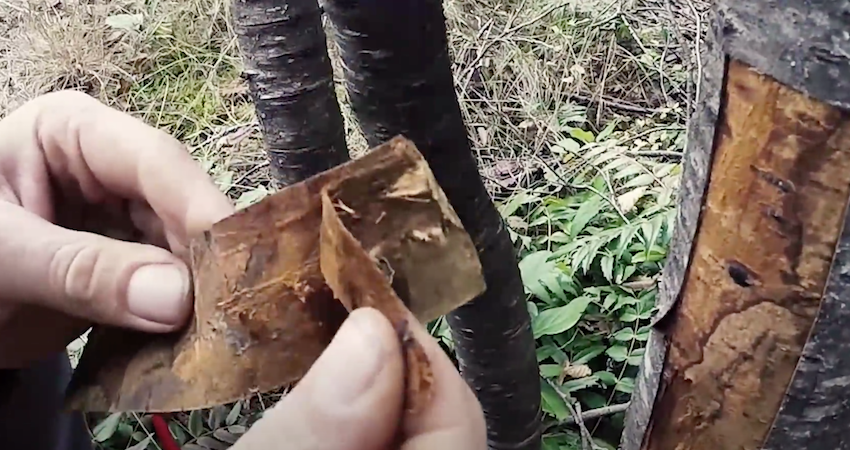 King's Dispensatory writes 'Wild cherry bark has a tonic and stimulating influence on the digestive apparatus, and a simultaneous sedative action on the nervous system and circulation.

It is, therefore, valuable in all those cases where it is desirable to give tone and strength to the system, without, at the same time, causing too great an action of the heart and blood vessels, as, during convalescence from pleurisy, pneumonia, acute hepatitis, and other inflammatory and febrile diseases.

Its chief property is its power of relieving irritation of the mucous surfaces, making it an admirable remedy in many gastro-intestinal, pulmonic, and urinary troubles. It is useful in hectic fever, cough, diarrhoea, some forms of irritative dyspepsia, whooping-cough, irritability of the nervous system, etc'

The British Herbal Pharmacopoeia (BHP) describes the actions of Wild Cherry as 'antitussive, mild sedative, astringent'. It says it is indicated for 'persistent cough, pertussis (whooping cough), nervous dyspepsia' and specifically indicated for 'irritable and persistent cough of bronchitis, pertussis, cough due to increased irritability of respiratory mucosa'. The BHP recommends a dose of 0.5-2 grams or by infusion or a dose of 2-4 mls of the tincture.

Thomas Bartram writes that the actions of Wild Cherry include 'astringent, sedative, digestant, antitussive, antispasmodic, pectoral'. He suggests uses for it including 'hacking cough, whooping cough, asthma, bronchitis, croup, catarrh, irritable bowel syndrome and as a tonic in convalescence. Bartram recommends a tea from half a tsp of herb to a cup of boiled water, infuse for 15 minutes with a dose of half to one cup. 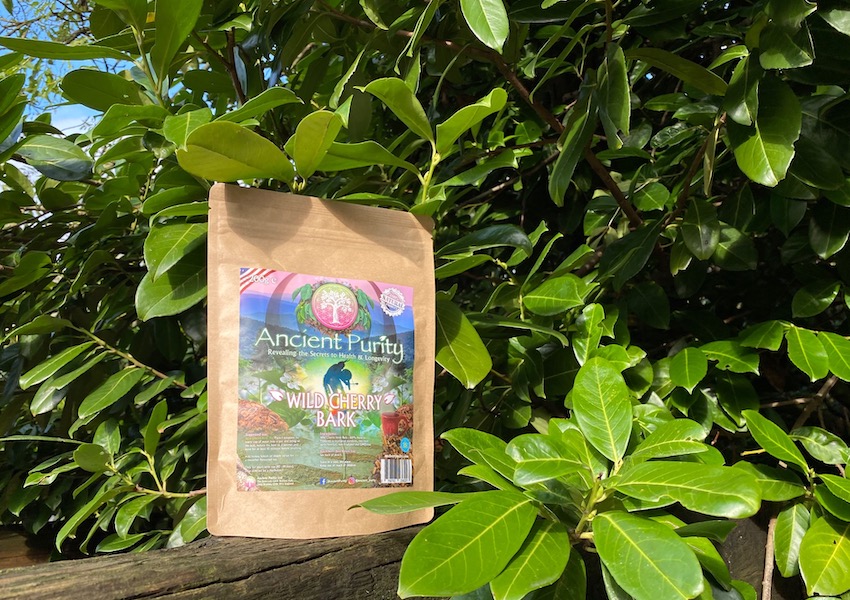