Milk Thistle is unique in its ability to protect the liver with no medical equivalent. In cases of poisoning with Amanita mushrooms, which destroy the liver, it is the only treatment option. It has been so dramatically effective that the treatment has never been disputed, even by the medical community. Although Milk Thistle is mostly used for liver issues, such as inflammation and scarring of the liver, this Ancient Herb is also fights numerous health conditions including: high cholesterol, high blood glucose, heartburn, upset stomach, hangover, gallbladder issues, menstrual discomfort and even low mood. 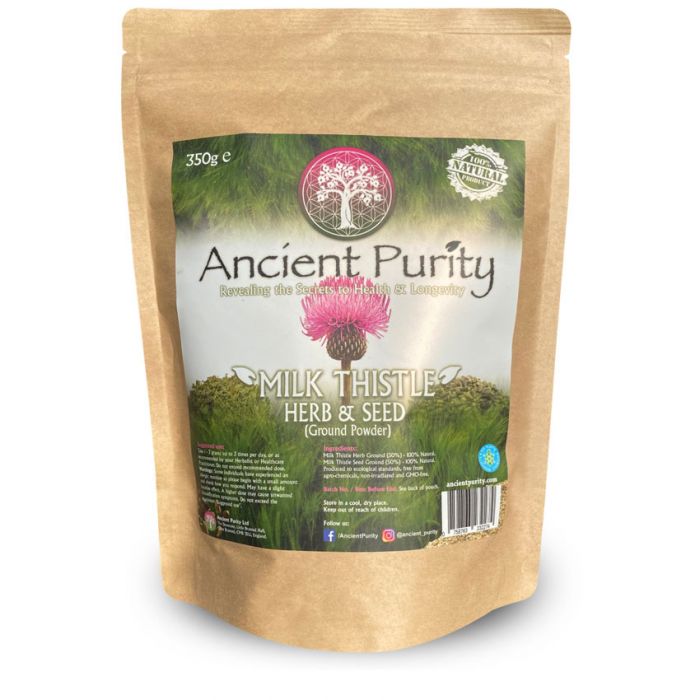 Ancient Purity presents the Ultimate in Milk Thistle, Herb and Seeds, naturally dried and lightly ground. Get the absolute full-spectrum benefits of one of the most incredible and respected herbs on the planet. No capsule, no extract, just both medicinal aspects of the plant. We mix the Herb and Seed together. Milk Thistle was approved in 1986 as a treatment for liver issues and it is widely used on alcoholic inflammation of the liver, alcoholic fatty liver, scarring (fibrosis) of the liver, liver poisoning and viral liver inflammation. It has also been shown to protect the liver against medications such as acetaminophen, a non-aspirin pain reliever. So a really affective Multi use Plant Medicine.

The active ingredient or liver-protecting compound in Milk Thistle is known as silymarin. This substance, which actually consists of a group of compounds called flavonolignands, helps repair liver cells damaged by alcohol and other toxic substances by stimulating protein synthesis. By changing the outside layer of liver cells, it also prevents certain toxins from getting inside. Silymarin also seems to encourage liver cell growth. It can reduce inflammation (important for people with liver inflammation), and has potent antioxidant effects. Antioxidants are thought to protect body cells from damage caused by a chemical process called oxidation. Milk Thistle naturally contains about 70 - 80% Silymarin (and many other constituents thought to work in harmony). Let us try and summarise all its incredible uses in one page somehow. 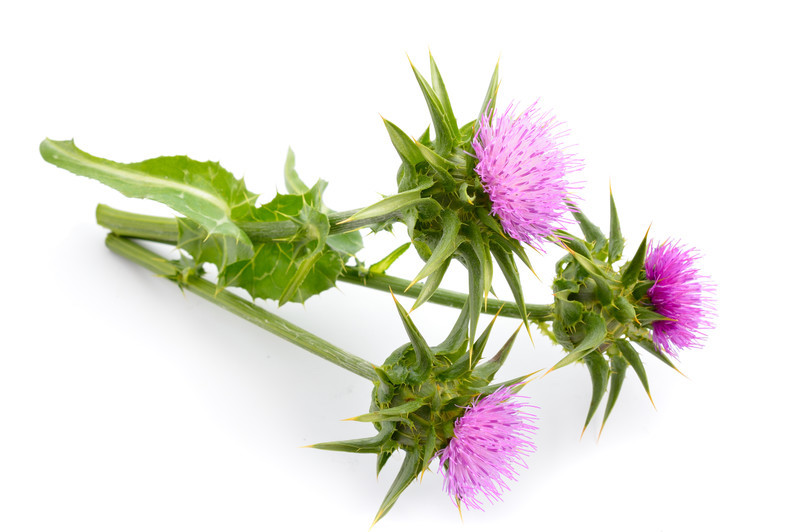 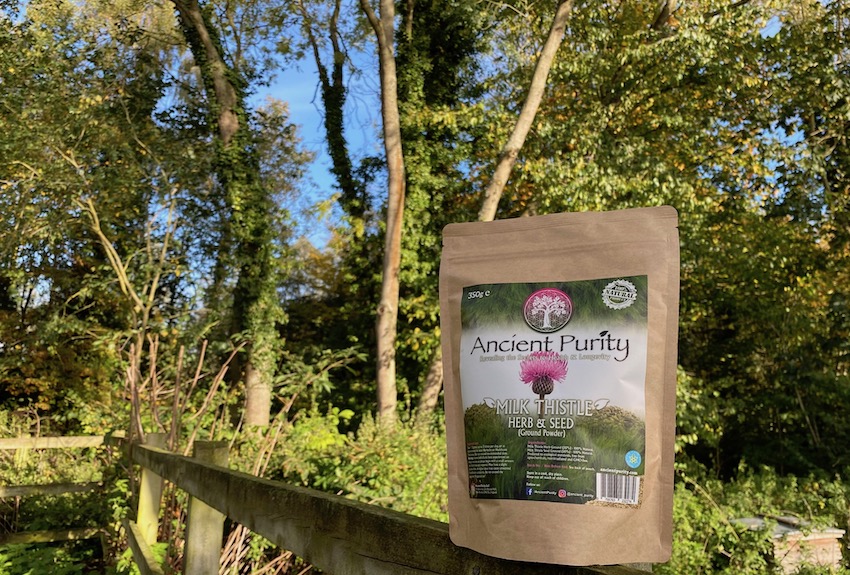 Glutathione... Glutathione is a component produced from 3 amino acids: glutamic acid, glycine, and cysteine. This important substance is made by the liver and involved in numerous body processes. Glutathione plays a role in tissue repair and building, making proteins and chemicals needed in our bodies, and in the function of our immune systems. One of the biggest milk thistle benefits is that it preserves glutathione. The modern western diet that includes: pollution, toxins, medications, stress, trauma, ageing, infections and radiation all work to deplete liver capabilities and also glutathione in the body. Milk thistle helps increase glutathione levels by improving liver detox functions. Milk thistle strengthens the liver cell walls, buffering them from invading toxins, and supports liver regeneration and glutathione formation.

Liver Protection... For people who like to drink alcoholic beverages, Milk Thistle is worth considering. It contains silymarin and silybin, antioxidants that are known to help protect the liver from toxins, including the effects of alcohol. Not only has silymarin been found to increase glutathione, but it also may help to regenerate liver cells. Taking Milk Thistle throughout entire festive seasons, holidays and if you're planning a weekend session, would be a wise choice.  In Clinical trials, Milk Thistle was found to be hepatoprotective (liver supportive) and may, therefore, be helpful with serious illness.

Bone Guard... Milk thistle has been shown in experimental test-tube and animal studies to stimulate bone mineralisation and potentially be protective against bone loss. A 2013 research showed that Milk Thistle assisted to prevent bone loss. You can read the scientific report on bone loss here. The research investigated specifically at bone loss due to estrogen deficiency. It is not yet fully clear whether Milk Thistle is equally beneficial for bone loss with a different cause. However, due to the study’s result, researchers suggest Milk Thistle may be a useful therapy for preventing or delaying bone loss in postmenopausal women. In addition, studies showed that combining milk thistle extract and isoflavone (A class of polyphenolic compounds) has a powerful action on bones due to enhanced osteogenic activity.

Take your smoothies to the Wild Side and add Milk Thistle 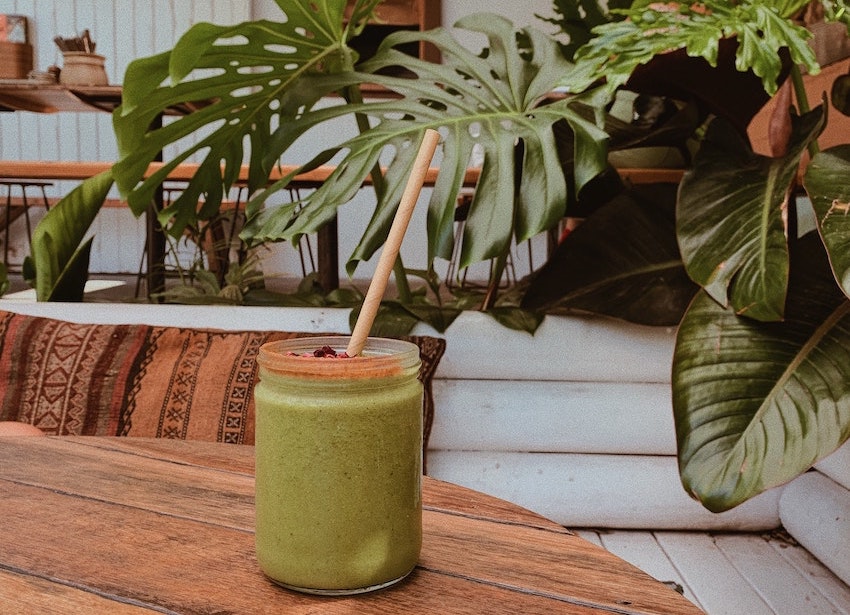 Hormones & Cholesterol, Breast Milk Production... Milk Thistle has some oestrogen-like effects that may stimulate the flow of breast milk in women who are breastfeeding infants. It may also be used to start late menstrual periods. Milk Thistle's oestrogen-like effect may also have some usefulness for prostate health. In animal studies and one small study in humans, Milk Thistle produced modest reductions in total cholesterol. These results have not been demonstrated in larger human studies. Don't worry men! This will not start giving your body oestrogen, in actual fact it’s part of Ancient Purity's Oestrogen Removal Pack, as excess Oestrogen is chelated by the liver and you will need your liver to be in top shape to do this. The single randomised controlled study found that mothers taking just half a gram of Milk Thistle daily for 63 days produced 64% more milk than those taking a placebo.

Supports Cognition… A 2015 study found that Milk Thistle Powder improved the resistance to oxidative stress which is a potential cause of memory loss and other cognitive abilities serious enough to interfere with daily life. In this way, Milk Thistle might enhance cognition and fight degenerative issues affecting the mind. More scientific study on humans will be necessary to confirm the positive effects of Milk Thistle on brain health. The firs results are promising! You can read the scientific report on cognition here. 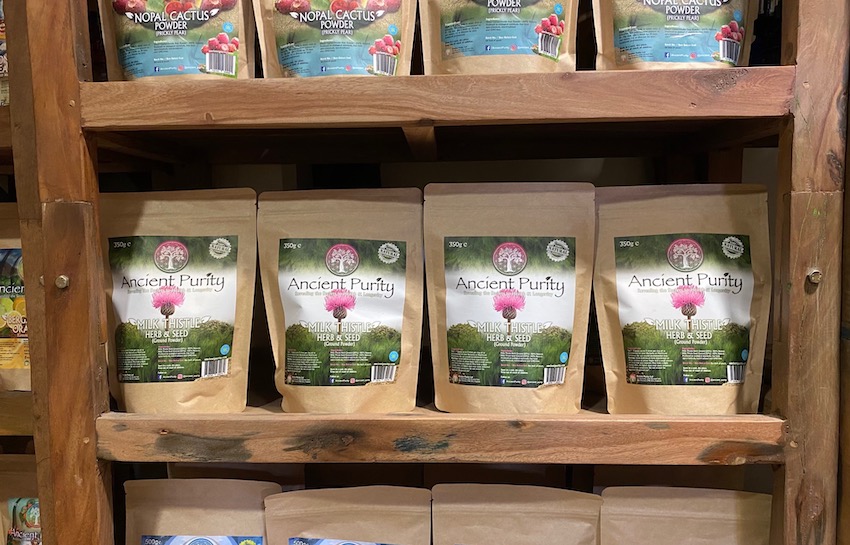 Milk Thistle might Reduce Acne… A randomised clinical trial conducted on 56 participants revealed that Milk Thistle might be supportive in treating acne. In these participants, serum levels of glutathione, malondialdehyde, and interleukin-8 were evaluated before and after 8-week treatment with oral silymarin in combination with other oral antioxidants. The results showed a reduction in serum malondialdehyde and increase in serum glutathione. This enhancement in biochemical data indicated the beneficial properties of Milk Thistle in treating skin issues like acne. Finally, it is always a good idea to speak to a healthcare practitioner before beginning to take Milk Thistle or any other food supplement, as it might interact with other medicines or conditions. 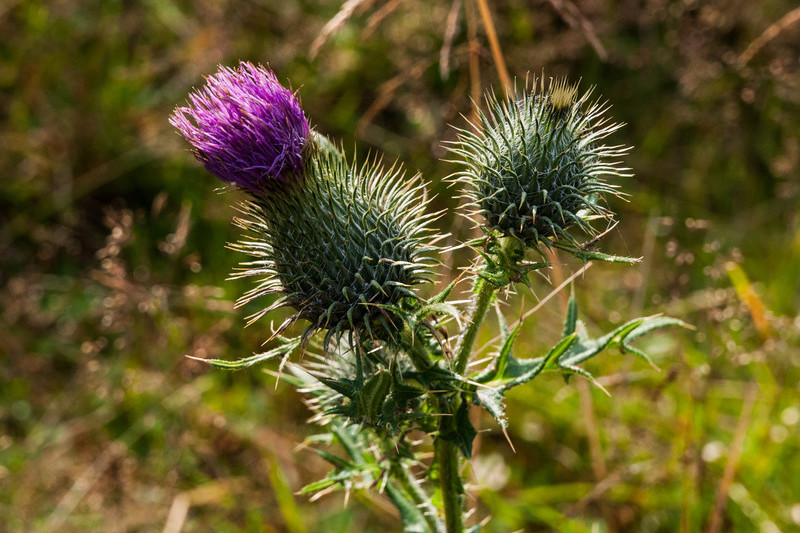 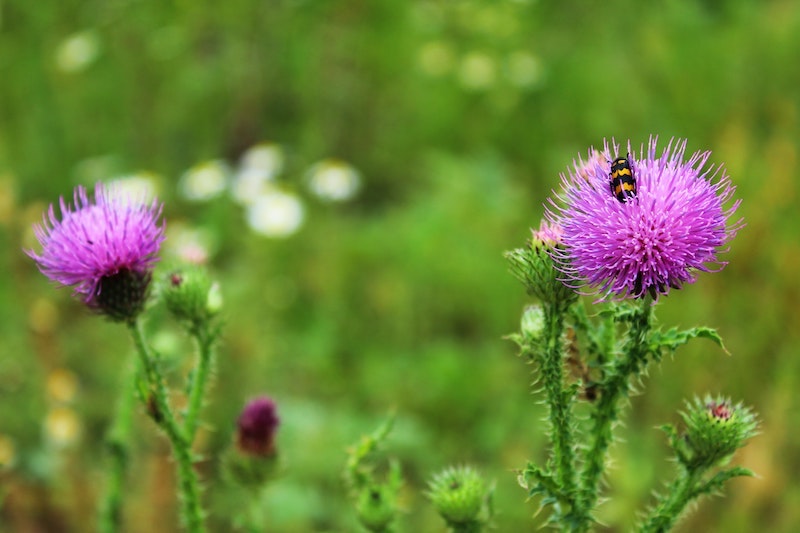 Milk Thistle is a staple of the British Countryside and also of many European Countries... Milk Thistle grows up to 30-200cm tall, having an overall conical shape with an approx. 16 cm max diameter base. The stem is grooved and more or less cottony. With the largest specimens, the stem is hollow. The leaves are oblong to lanceolate. They are either lobate or pinnate, with spiny edges. They are hairless, shiny green, with milk-white veins.  The flower heads are 4-12 cm long and wide, of red-purple colour. They flower from June to August in the North or December to February in the Southern Hemisphere (Summer through Autumn). The bracts are hairless, with triangular, spine-edged appendages, tipped with a stout yellow spine. The achenes are black, with a simple long white pappus, surrounded by a yellow basal ring. It's worth foraging and learning more about this natural SuperHerb.

Did you know that Milk Thistle is also a culinary delight? You can eat wild Milk Thistle on its own as it has also been known to be used as food. The roots can be eaten raw or boiled and buttered or par-boiled and roasted. The young shoots in spring can be cut down to the root and boiled and buttered. The spiny bracts on the flower head were eaten in the past like globe artichoke, and the stems (after peeling) can be soaked overnight to remove bitterness and then stewed. The leaves can be trimmed of prickles and boiled and make a good spinach substitute or they can also be added raw to salads. 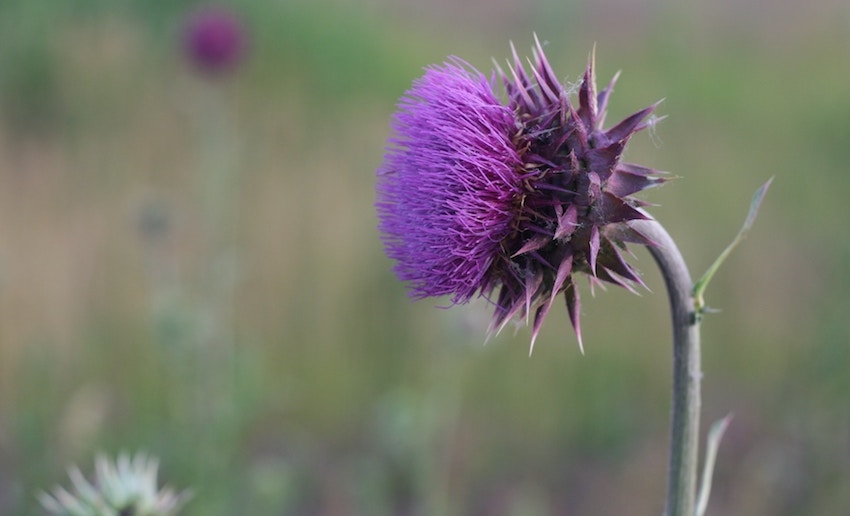 Past records have shown that the herb Milk Thistle has been used over 2,000 years. During the 17th century, a pharmacist, Nicholas Culpeper, used Milk Thistle’s derivatives in treating the obstructions of spleen and liver. He recommended his patients Milk Thistle’s consumption especially to treat jaundice. This ancient herb’s dried fruit is composed of flavonoids known as Silymarin. Basically, this flavonoid complex is made of 3 main components known as silicristin, silibinin and silidianin. Out of these 3 components, Silibinin is the most active providing the most of health benefits delivered by Milk Thistle.

Research shows that taking a daily amount of 420 to 600 mg of silymarin might provide positive effects in patients affected with various liver conditions. However, patients with some kinds of chronic liver illness also experienced improvement after long-term use of Silymarin. The silymarin extracted from the plant is known to have anti-inflammatory, antioxidant and antiviral properties. Milk Thistle has traditionally been used to treat gallbladder and liver disorders, enhance breast milk production, prevent the growth of harmful cells and even protect the liver from snake bites, excessive alcohol and other environmental toxins. If something has been used for more than 2,000 years, it must work. 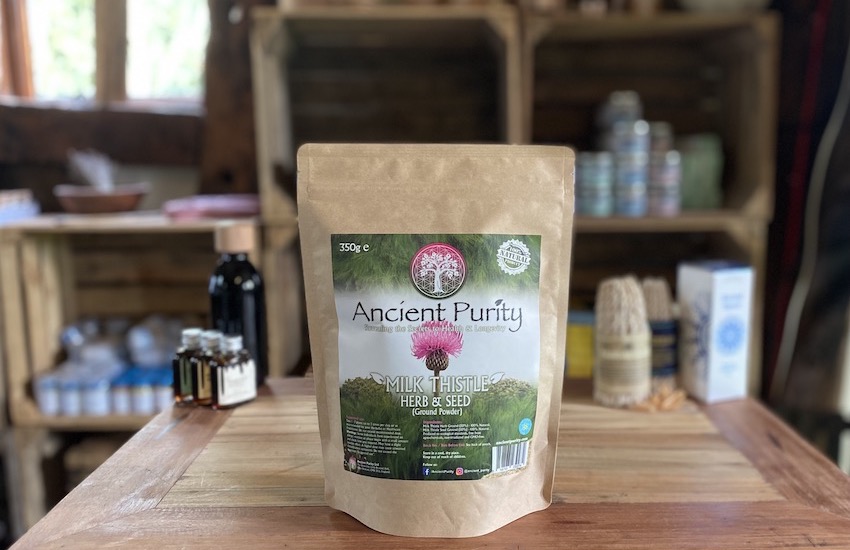 Note: Milk Thistle may interact with some medications. This is of particular concern if a person is already receiving treatment for liver conditions. Consult a doctor before taking if you are on any medication.

Sage Journals - Advances in the Use of Milk Thistle (Silybum marianum)

US National Library of Medicine - Silymarin as Supportive Treatment in Liver Diseases: A Narrative Review