Sweetgrass is one of the most important Native American Ceremonial Plants, used by many tribes as an incense and purifying herb. Sweetgrass symbolises healing, peace, and spirituality in many Native Cultures, and braids of Sweetgrass are often left as offerings at graves and sacred sites. 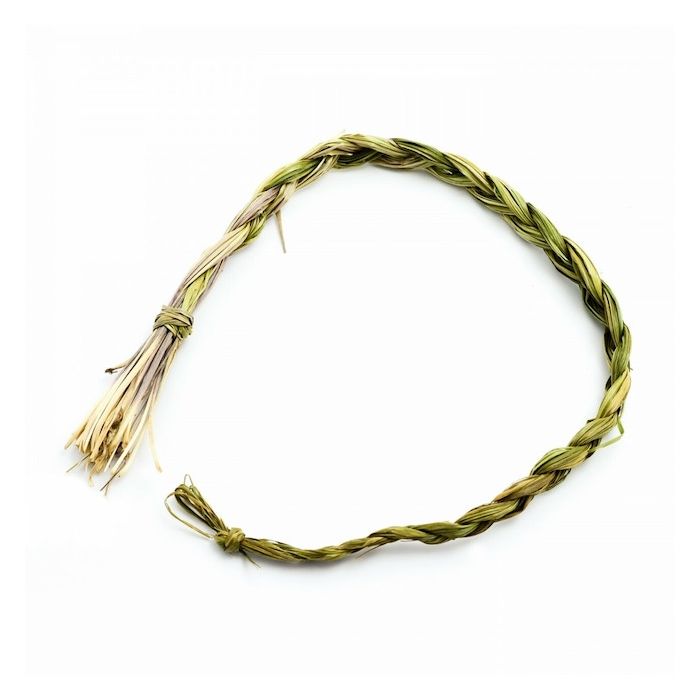 Sweetgrass grown in the High Plains of Canada... Infuse your home with the unique fragrance of sweetgrass with these ready-to-use smudge braids, a unique way of enhancing your space. These braids are wild crafted and gathered by hand in an eco-friendly process, they are put together by hand. With deep roots in Native American ritual, smudging has long been used for ridding spaces of negative energy with the sweet scent of burning herbs. A perfect way to fill your space with a natural and aromatic fragrance, these sage bundles are bound with organic string and smoulder slowly to create a distinctive vanilla-like sweetgrass scent.

Sweetgrass is also one of the herbs frequently included in medicine bundles and amulets. Plains Native Indian peoples used to chew sweetgrass during ritual fasts, and it was also used as a medicinal herb in some tribes. Sweetgrass still holds great spiritual importance to many Native tribes today, but these days it is almost always burned as an incense, not chewed or eaten. More prosaically, sweetgrass is also used in traditional basket-weaving. In the myths of some tribes, such as the Ojibwe and Cree, sweetgrass is said to be the eldest of all plants and sometimes referred to as the hair of Mother Earth. 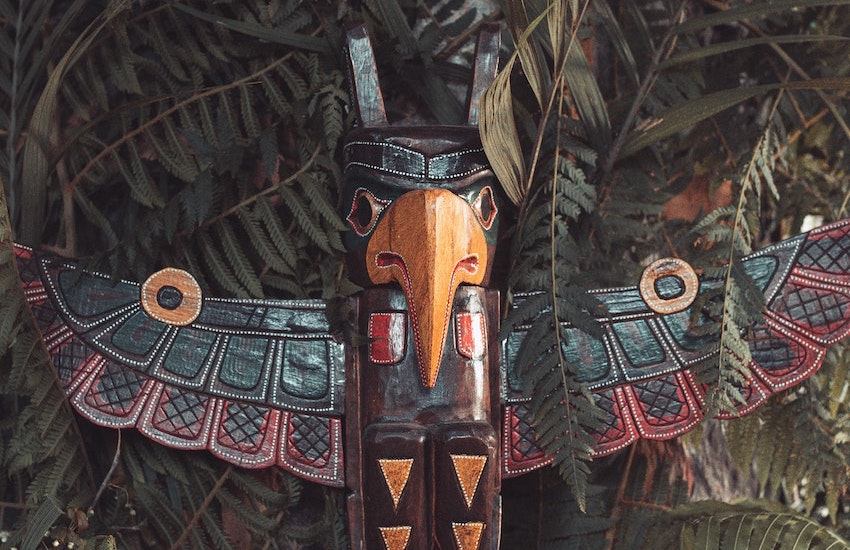 An extremely hardy perennial herb with a sweet, long-lasting, vanilla-like fragrance, sweet grass is indigenous to the comparatively cool regions of Europe and North America, growing naturally in the nutrient-rich soil of wet meadows, low prairies, cool mountain canyons, and along the shady banks of streams, rivers, and lakes. The plant grows to a height of about 24 inches with long, scented stalks hiding shiny undersides. Its scientific name, Hierochloe odorata, literally means, “fragrant holy grass,” and the plant has been regarded as sacred everywhere it is grown and harvested. In fact, Native Americans called it, “the grass that never dies,” because they believed the plant retained its spirit and fragrance long after it had been harvested; some tribes believed it was the first plant to cover the earth. This aromatic herb gets its namesake from its sweet blades and has been used by humans over the centuries in functions ranging from ingredients in herbal medicine to the production of distilled spirits. It has even been used as a flavoring for tea, tobacco, candy, soft drinks, and vodka.

Indigenous people of North America have been using sweet grass traditionally for their religious ceremonies as well as for specific therapeutic purposes. Many stuffed the fragrant grass into their pillows and mattresses with hopes of having sweet dreams, and they even wove the dried leaves into their fabrics and clothing to ensure the soft aroma of sweet grass followed them everywhere. Sweet Grass didn’t just end with clothing; however, in addition, native tribes throughout North America used its long leaves to weave baskets and other traditional handicrafts, many of which retained the plant’s aroma long after weavers were finished. In Northern Europe, sweet grass was laid on the ground in front of churches on Saints’ days so the sweet fragrance would be released when people walked inside. Among Native Americans, sweet grass has a long tradition of use in sacred rituals as a “smudging” herb and is still widely used for that purpose today. 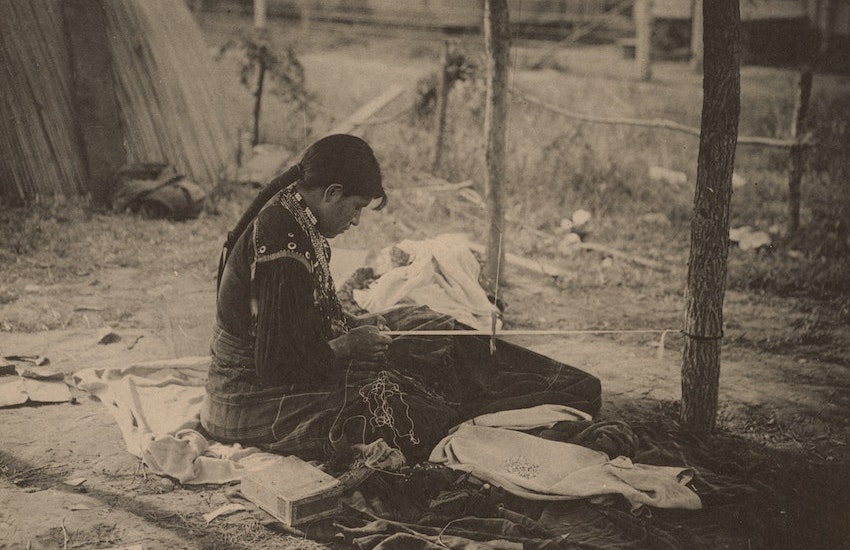 Using an herbaceous healing and purifying incense, the act of smudging is ritual alchemy — changing and shifting the air element, transforming one’s environment to a level of mystical elevation. The use of incense and smoke to connect humans to the spirit world can be easily traced throughout the East in parts of Asia, and even dating as far back to Ancient Greece. Smudging with dried white sage is a 2,000 year-old Indigenous American practice; shamans used dried sage plants on their fires as a ritual to call upon ancestral spirits. Any conflict, anger, illness or evil was absorbed by the sage smoke to be released or cleansed from the energy field of a person. Next, braided and dried sweet grass would be burned to call forth the energy of peace and love. Sweet grass braids smolder and don’t produce an open flame when burned. This ancient mystical ritual is a simple one to incorporate into your life, or any time you feel like your aura might need a little polishing; some believe you can never really smudge too much!

Smudging your sacred space, your home or office, or even your body with herbs like sage or sweet grass is like a deep metaphysical cleansing. The smoke from dried herbs actually changes the ionic composition of the air and can have a direct effect on reducing our stress. In fact, sweet grass is the ying to sage’s yang, because just as sage is used to cleanse and clear negativity, sweet grass is used to bring peace and positivity. Of course, one mustn’t rely solely on smoke and firepower to experience the benefits of sweet grass; the essential oils extracted from the seeds of these sweet stems are chock full of natural pick-me-ups for even your most stubborn moods or ailments. Its aroma alone cues your mind and body to relax, wading off tension and anxiety, thus promoting higher natural energy levels – perfect for when you need a boost, but don’t need another cup of coffee!

If you’d rather ease your way into using sweet grass as part of your essential oils toolbox, start by adding a couple of drops to your laundry water, dryer balls, cleaning detergents, favorite lotion, or any place where you want an extra boost of that refreshingly light scent. Added bonus: though the scent is sweet to humans, it’s repulsive to mosquitos, so it should help eliminate the seasonal buzz in your ears! Sweet grass has proven to be a sacred, powerful plant believed by many to dispel negative energy, elicit emotional strength, and engage our minds and senses. So while we’re at it, maybe we could all learn a few life lessons from these sweet leaves: stand tall, always keep growing, be persistent, it’s important to cleanse every once in a while, spread the love, and while the grass isn’t always greener, it is certainly sweeter. 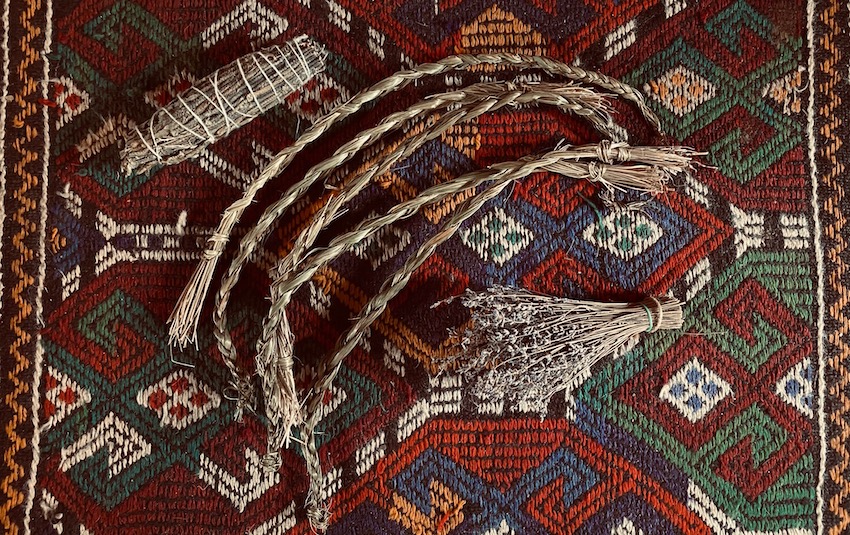