Grown in its native country of Iran collected following the ancient, unique, extraction process, making this a thick  elixir Resin of the Persian plant species in the genus Ferula, chiefly Ferula Gummosa. This is Galbanum in a raw and unadulterated form, it's true and most effective form. The process ensures the highest essential oil content. The oozing resin is taken from the plant in a semi-liquid form. Galbanum resin is of the purest and most potent quality. 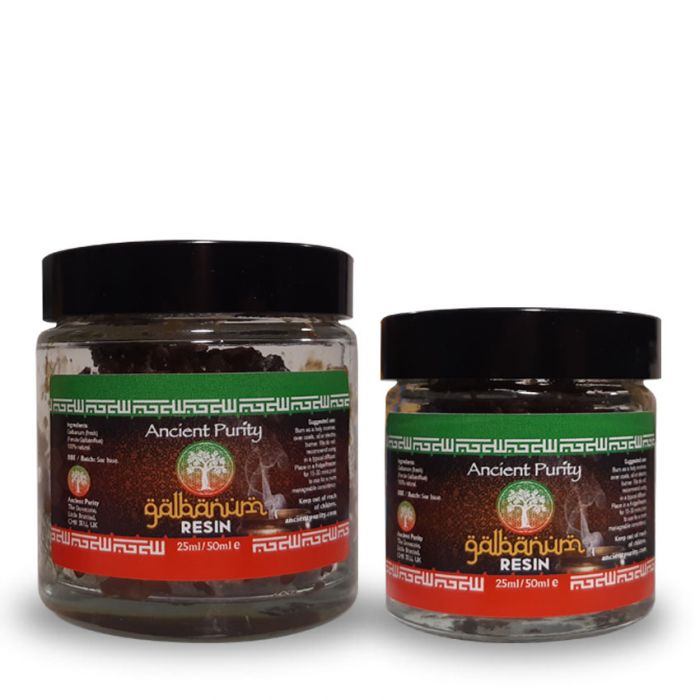 Galbanum is Ancient Purity in action, it is used in many incense mixtures, including “God’s Smile”, the incense blend which is based on the recipe in the Book of Exodus. It also provides the “green” note in many perfumes today. It can be a bit tough to handle since it is very sticky, but it is worth the effort to get it on the coal or electric burner and experience. In traditional medicine systems, Galbanum was used as a stimulant, expectorant, antispasmodic, anti-inflammatory, antimicrobial and antiseptic. It is believed to stimulate digestion and enhance memory and brain function. Thoughts in time and a fragrance of an unknown season, the Galbanum burned with cool calculous and reason.

Many people report vivid and insightful dreams after burning Galbanum in the evening. It has been used more as an essential oil and people put the essential oil in a diffuser, however Galbanum resin has a much deeper,  richer and more effective complex aromatic profile than the Galbanum essential oil. If you have tried only the essential oil before you will be impressed at the superior effect of this natural unadulterated, unfiltered, fresh raw resin. Galbanum like many other resins, performs as a fixative in aromatic compositions and perfumes. Ancient Purity's Galbanum Resin is sourced from the Razavi Khorasan province in Iran, known to be where the highest quality of Galbanum is harvested. As with many other resins, woods and botanicals, Galbanum has suffered from decades of exploitation and over-harvesting, but efforts are underway to replenish the ancient resource by countries that produce and export Galbanum, we are working with such a company. 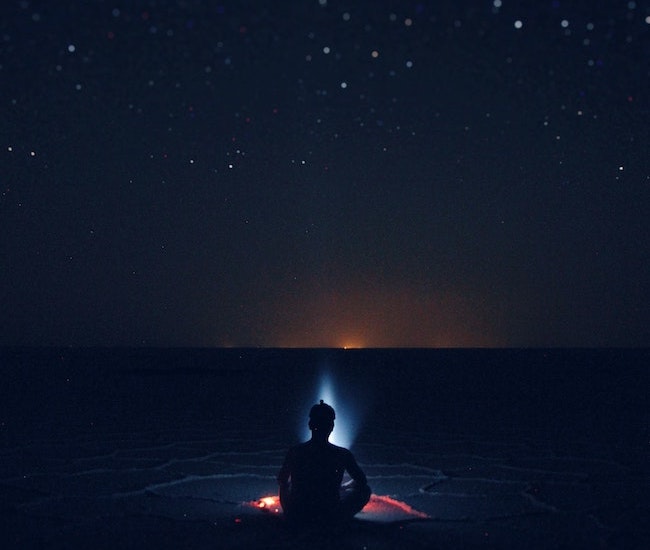 Mentioned in the texts of all major ancient civilizations, Galbanum was long ago assigned mystical and healing powers... The deep green aroma of Galbanum represents the element of air. It is grounding, uplifting and balancing.  It rejuvenates ageing skin and is used as a fixative in perfumery and aromatherapy. Galbanum contains aroundt 8% terpenes; about 65% of a resin which contains sulphur, then about 20% gum and a very small quantity of the colourless crystalline substance umbelliferone. It also contains α-pinene, β-pinene, limonene, cadinene, 3-carene, ocimene.

Application/ Skincare:  The essential oil of Galbanum especially when used with Elemi in skin products is for revitalising ageing skin and in body care products to warm. It has soothing properties, especially on aching hands, feet or joints. Its anti-inflammatory qualities make it a wonderful aid for poor circulation and can be used in hot compresses for most pain relief.  Galbanum works on ageing skin, wrinkles, acne and scar tissue; it is antiseptic and antimicrobial, wounds are more quickly healed.

Emotional/Energetic (Inhaled)
Galbanum was widely used as a component of incense and is listed in the Holy Bible as part of the sweet spices used to make Holy Incense. Holy Incense was only made for holy communication and for worship … as it was believed to be free from evil. Its preparation required certain rituals and it was forbidden to make such incense just for the pleasure of the senses. It is often recommended for use to heal childhood traumas. [In a quiet place, inhale the ancient scent of Galbanum while meditating on the trauma or walking a labyrinth, and removing the painful memory from your mind or at least parking it on the ‘shelf of healed memory’. As an expectorant it promotes ‘spitting’ and is used for chronic bronchitis. 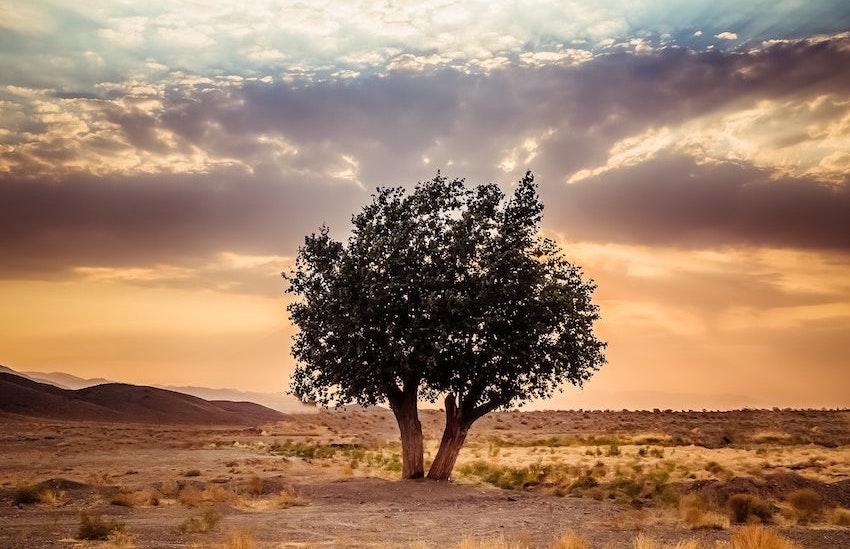 According to Exodus, it is part of the “perfumes” God revealed to Moses on Mount Sinai: “Take fragrant spices--gum resin, onycha and galbanum--and pure frankincense, all in equal amounts.” “Soft galbanum” – also called “Levant galbanum” – is the one used in perfumery. It has been used throughout the ages by the Greek, Roman and Egyptian cultures as part of their incense ceremonies and traditional medicinal practices. In the Book of Exodus 30:34, it is mentioned as being used in the making of the Ketoret which is used when referring to the consecrated incense described in the Hebrew Bible and Talmud. It was offered on the specialized incense altar in the time when the Tabernacle was located in the First and Second Jerusalem Temples. The ketoret was an important component of the Temple service in Jerusalem. Rashi of the 12th century comments on this passage that galbanum is bitter and was included in the incense as a reminder of deliberate and unrepentant sinners. The incense formula was apparently ground small or into a powder.

Galbanum is related to Saturn, the Sun, and the sign of Libra. When Libras are sick, to be healed quickly they must smell galbanum on a daily basis. The Latin name Ferula derives in part from Ferule which is a schoolmaster's rod, such as a cane, stick, or flat piece of wood, used in punishing children. A ferula called narthex (or Giant fennel), which shares the galbanum-like scent, has long, straight and sturdy hollow stalks, which are segmented like bamboo. They were used as torches in antiquity and it is with such a torch that, according to Greek mythology, Prometheus, who deceived his father stealing some of his fire, brought fire to humanity. Bacchae were described using the bamboo-like stalks as weapons.[6] Such rods were also used for walking sticks, splints, for stirring boiling liquids, and for corporal punishment. Some of the mythology may have transferred to the related galbanum which was referred to as the sacred “mother resin.” Galbanum was highly treasured as a sacred substance by the ancient Egyptians. The “green” incense of Egyptian antiquity is believed to have been Galbanum. 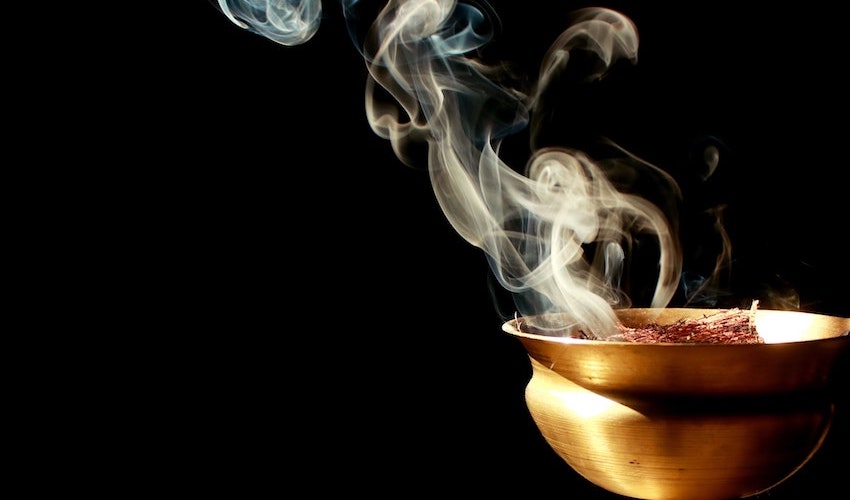 How to create magic with Galbanum

You could either use our Oil Burner which has a glass dish heated by the candle as seen below in related products or get a bowl or cauldron and fill it with ash, sand or salt. The salt, sand or ash is in it to absorb the heat of the charcoal. You can also use a grate. Light the charcoal completely. Many people only light the edges of the charcoal and it fizzles out fast. You need to light the while all the charcoal. Put a little Galbanum on the charcoal. Less is more with Galbanum, you don't need a lot of it. You just need enough to create an experience or to accomplish your magical goals. Its scent is complex, multi-layered and long lasting, green, and dark and mysterious. It blends very well with Elemi (gum or oil), Storax, Camphor, Cedarwood, Cinnamon, Sage, Hyacinth, Tonka Bean, Tuberose, Bergamot, Narcissus, Orris root, Rose, Clove, Cypress, Sandalwood, Violet, and Geranium. It works best when used in very small amounts.
Create a ceremony out of lighting your Galbanum resin. You could chant or speak mantras that are meaningful for you. Ask the universe or your higher power to help with your intentions. Experiment with different resins for different reasons. We listed above what Galbanum is good for but also at Ancient Purity we love Dragon's Blood which is really great for  cleansing and activation, classics you will know like Frankincense and Myrrh are a more gentle energy balancing, peaceful breath. Galbanum is sticky, but you'll get use to working with it and as you can read in the suggested use, you could freeze it first and then chill, this has not been shown to have any negative effect on the power of Galbanum. It can be used for healing, purification and protection, with a huge energy it could be quite useful for banishing negative energies in exorcism rituals.  It is also used for shamanic journeys and is very useful when our soul is in a process of transformation and/or of change. Galbanum can aid contemplation of the fact that every goal is a new beginning. 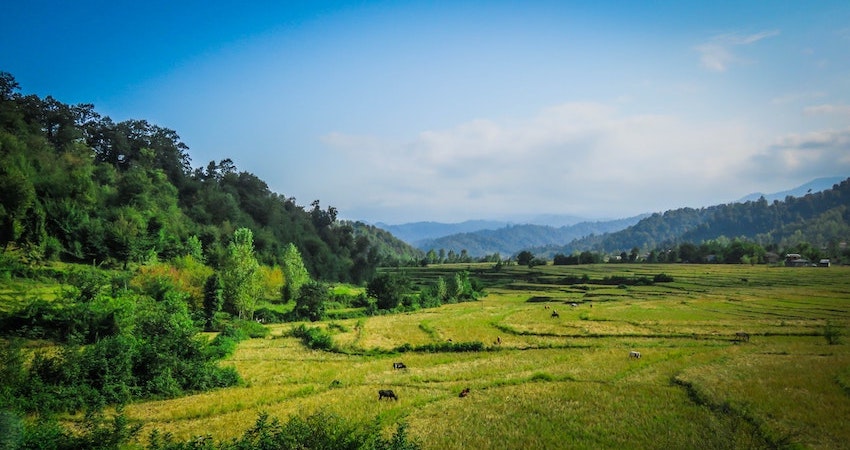 Galbanum is an aromatic gum resin, the product of an umbelliferous Iranian Persian plant species, Ferula gummosa (or galbaniflua). It is the only truesource of “soft Galbanum.” Many other species of Ferula genus also produce gums, but of greatly varying qualities.

Traditional gum gathering is done with a locally made, wrought-iron tool. In May-June, when the leaves are dry, the plant’s roots are exposed and the outgrowth is scored to release a white to straw-yellow resin which slowly solidify upon exposure to the air. The plant is self-fertile. It grows in the sun and prefers dry or moist soil. 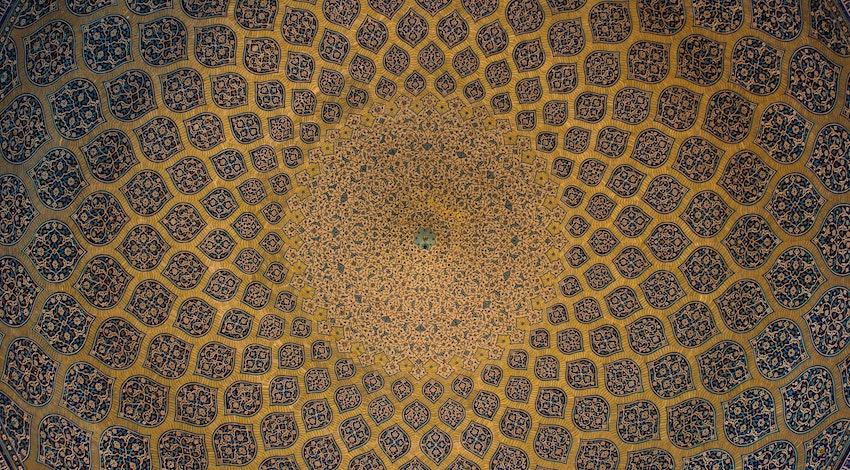 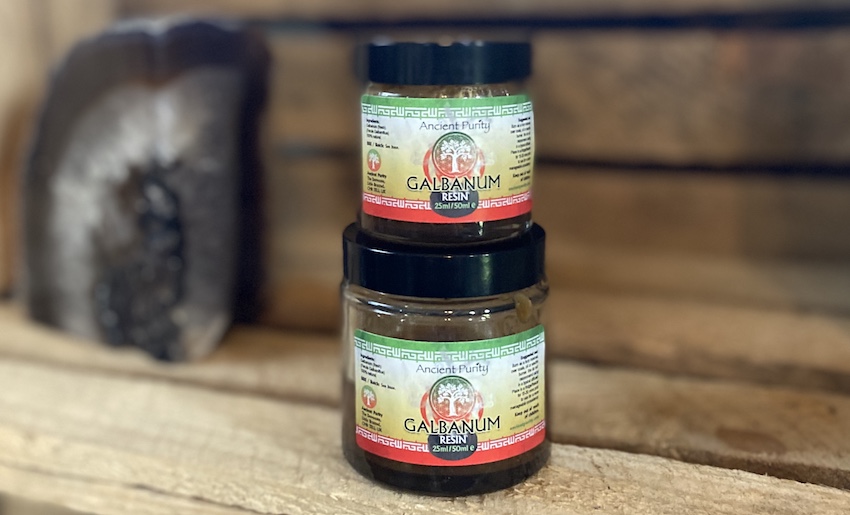