King of the Medicinal Mushrooms... Wildcrafted Siberian Chaga, a powerful and sought after Mushroom, possibly the highest antioxidant content Fungi. Documented extensively, possibly dating back to 3300BC. The power of ancient trees is present in this adaptogenic Mushroom. 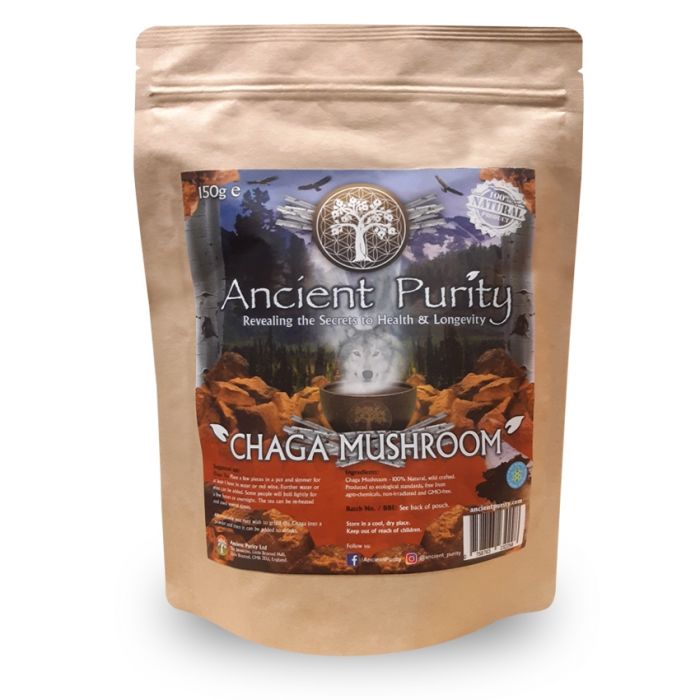 Ancient Purity present the ancient magic of the forest, alive and thriving in the modern world... The Chaga Mushroom has strong immune enhancing properties, high levels of antioxidants. It is an amazing health and longevity tonic full of phytonutrients that slow the ageing process. Chaga mushroom has been a component of Russian folk medicine since the 16th century. Chaga's scientific name is "Inonotus obliquus". It is often referred to as the Birch Conk, Clinker Polypore, or Tinder Fungus. The Chaga mushroom also goes by many other names.

Known by the Siberian Russians as "A Gift from God" and also "The Mushroom of Immortality". The Japanese refer to it as "The Diamond of the Forest" Chaga is a premier adaptogen. An adaptogen is a metabolic regulator that increases an organisms' ability to adapt to environmental factors and resist stress. Though Chaga is a mushroom, the two most beneficial ways to consume its properties, are through a hot water extraction, by preparing it as a tea or an alcohol extraction, by making a tincture. Learn what Chaga's ancient powers can do today... 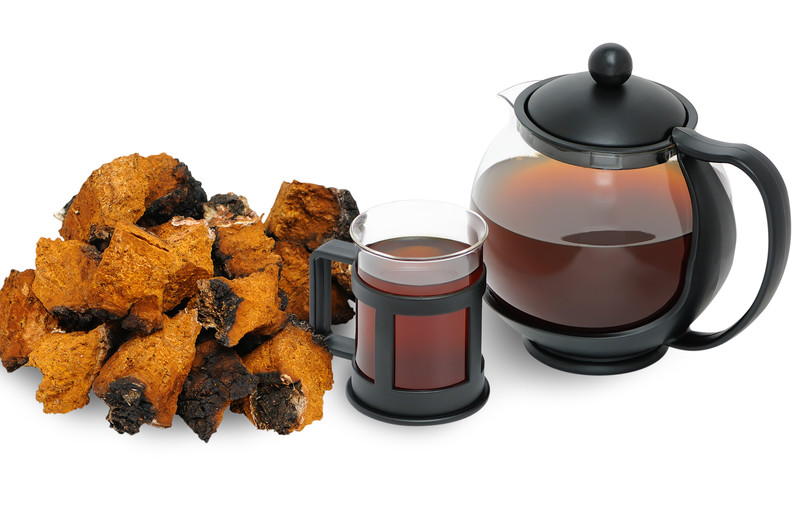 Chaga King of the Medicinal Mushrooms

Chaga polysaccharides effectively promote macrophage (white blood cell) activation through the MAPK and NF-κB signalling pathways, suggesting that Chaga polysaccharides help regulate the immune response of the body. Chaga has the highest level of superoxide dismutase or (SOD) detected in any food or herb in the world, Superoxide Dismutase (SOD) is an enzyme that repairs cells and reduces the damage done to them by superoxide, the most common free radical in the body. SOD is found in both the dermis and the epidermis and is key to the production of healthy fibroblasts (skin-building cells).

Studies have shown that SOD acts as both an antioxidant and anti-inflammatory, neutralising the free radicals that can lead to wrinkles and precancerous cell changes. Researchers are currently studying the potential of superoxide dismutase as an anti-ageing treatment since it is now known that SOD levels drop while free radical levels increase as we age. Superoxide Dismutase helps the body use zinc, copper, and manganese. The 2 types of SOD are: copper/zinc (Cu/Zn) SOD & manganese (Mn) SOD.

Each type of SOD plays a different role in keeping cells healthy. Cu/Zn SOD protects the cells’ cytoplasm, and Mn-SOD protects their mitochondria from free radical damage. Superoxide Dismutase has also been used in the treatment of joint, prostate, ulcer, inflammatory, bowel problems. In its topical form, it may help to reduce facial wrinkles, scar tissue, wounds and burns. Chaga mushroom has marked immuno-stimulatory activity and should be considered by anyone seeking super health and longevity. 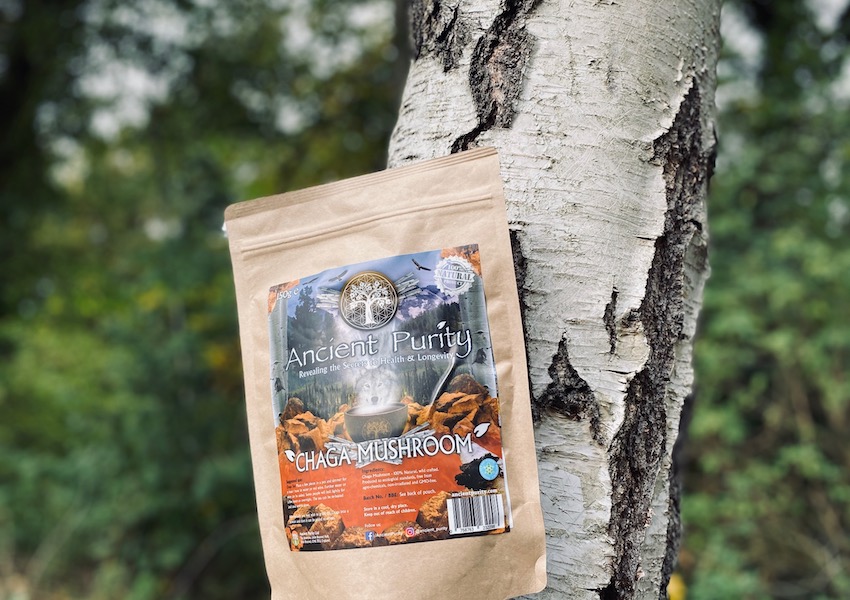 Chaga contains B and D vitamins and lots of protein which promote health over stress, low mood and lack of energy. Chaga has potent immune supporting properties it is a rich source of beta-glucans and polysaccharides that are essential nutrients for the immune system. These polysaccharides have strong anti-inflammatory and immune balancing properties, enhancing the body’s ability to produce natural killer cells to battle infections.

These polysaccharides are considered to be the primary active constituents of Chaga, at least from an immunological perspective. Upon ingestion, a range of secondary metabolites are produced, many of which are highly active as potent immune modulators. It has Sterols, triterpenes, saponins and polysaccharides. Of the triterpene group, inotodiol seems to be the most active. Another component in Chaga is Betulin which is absorbed and concentrates from the birch trees that it is commonly found to grow on. Betulin can easily be converted to Betulinic acid which has been shown to possess a wide spectrum of biological activities. 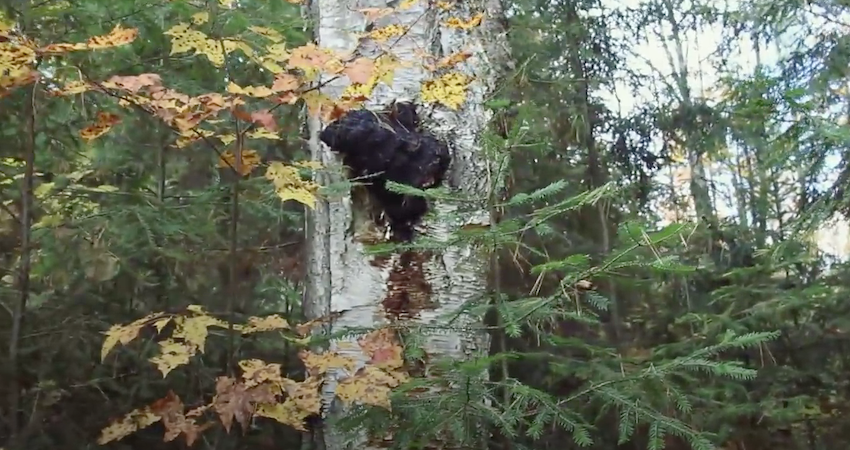 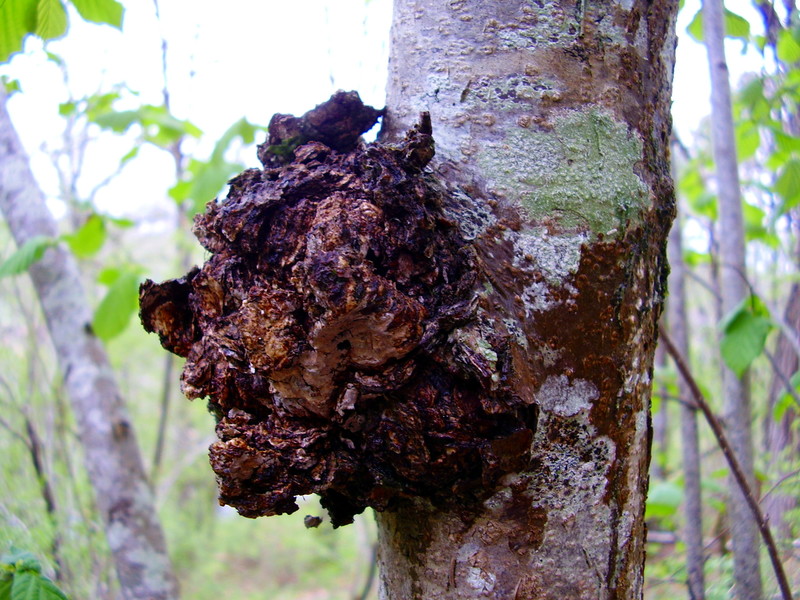 Like many medicinal mushrooms, Chaga is rich in beta-glucans, which have immunomodulating activities. Beta-glucans bind to Complement Receptor 3 (CR3) that allows the immune cells to recognize certain cells as non-self. Betulinic acid, a constituent of Chaga, is cytotoxic and triggers apoptosis through a direct effect on the mitochondria of cells.

Chaga has demonstrated an ability to restore health over major problems in many reported cases. Chaga is an immune system modulator as well as an adaptogen and has the highest level of superoxide dismutase or (SOD) detected in any food or herb in the world.

Bring the Wild into your Home and Enjoy Chaga Tea 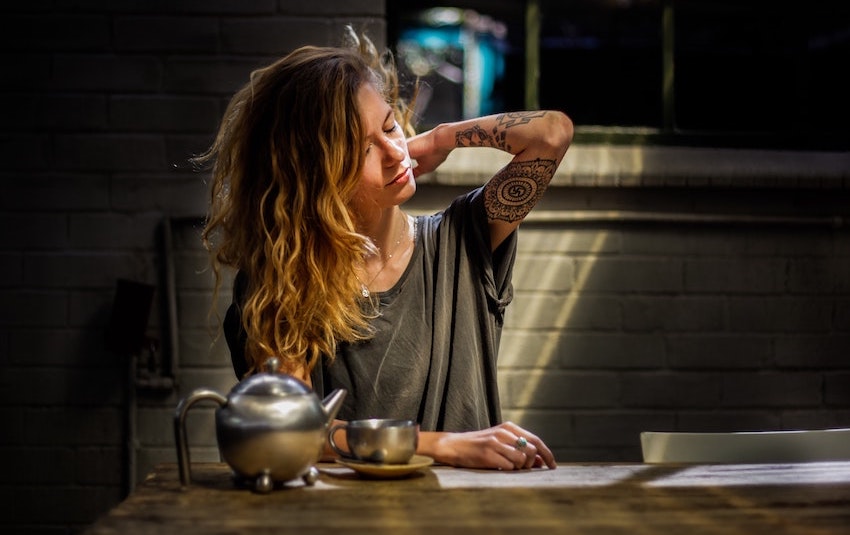 Chaga is a fungus that draws its nutrients and derives its extracts from the inner layers of the bark of the tree from which it grows on. The Chaga Mushroom is known to grow on different species of trees, but mainly on white and silver birch trees.

Chaga has been reported to be found growing on Elm, Hornbeam, Beech and Alder, although this would seem to be a very rare occurrence. The Chaga conk, which often grows to the size of a football, is normally found in the more cooler climates.

Chaga grows in the circumpolar temperate forests of earth's northern hemisphere. Chaga is found where Birch trees and forests are abundant, such as in the Russia, Northern areas of Europe, Scotland, Scandinavia, Canada and certain mountainous northern areas of North America. 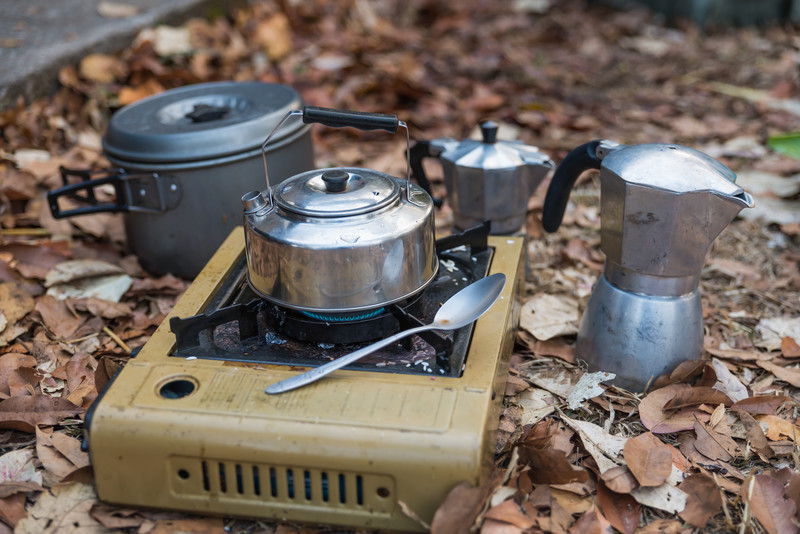 Encourage Your Wild Side 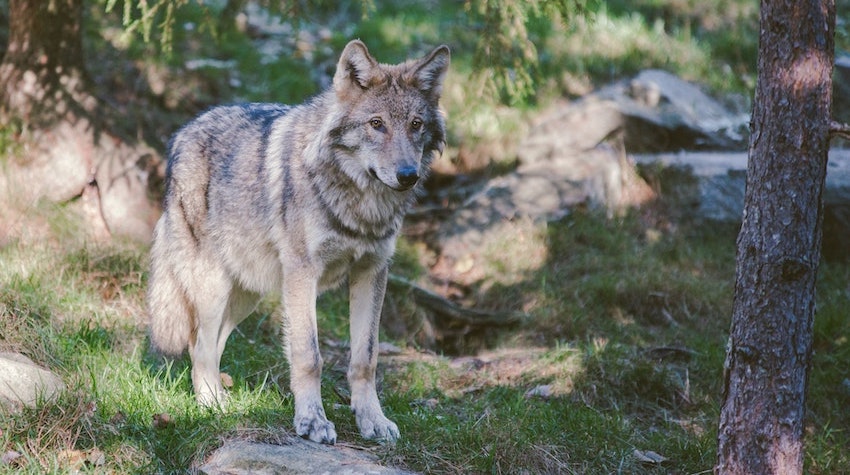 Ancient Purity works with a couple of individuals who collect the Chaga and have years of experience and knowledge. They have been following sustainable methods that take into account the whole eco system of the forest around the trees and the future of them before anything got written up and advised on sustainabe collection. We're doing this whole thing because we want to support nature, natural health and thrive wildly.

In short the sustainably sourced Chaga causes minimle to zero effect on the eco system around it, protecting, restoring and promoting sustainable use of terrestrial ecosystems, sustainably manage forests, combat desertification, and halt and reverse land degradation and halt biodiversity loss. The collection of Ancient Purity's Chaga supports local community, this happens because it provides income for both Chaga gatherers and the forest owners, also lets consider it gives individuals a chance to work in nature (If i wasn't running Ancient Purity, I'd quite like a forest based job).

Not just Tea... Make your own Tincture, Grind for a Coffee, or a Herbal Elixir 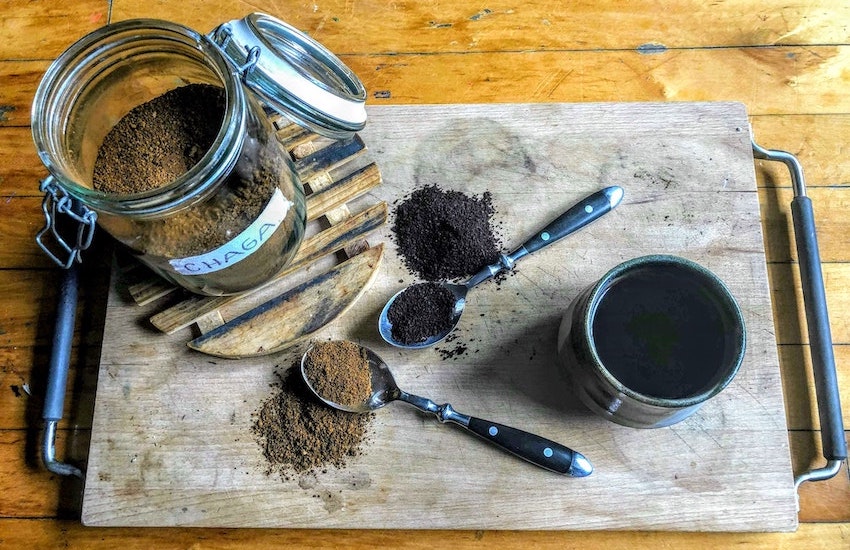 For thousands of years, Chaga (Inonotus Obliquus) has been revered throughout the known world (Eurasia), where it has been referred to as a precious "Gift from God" and nature's "King of Herbs".  Documented back well before the time of Christ, ancient Asian folk medicine practitioners relied upon Chaga, a special mushroom, to maintain a healthy life energy balance ("Chi"), preserve youth, promote longevity, and boost the body's immune system.

As a folk remedy, Chaga was ingested by the local people of the Siberian mountain regions in tea or powder form, inhaled from smoke and applied to the skin. Documented in the book "The Shen Nong Ben Cao Jing" in 100 B.C., the Chinese Monk Shen Nong proclaimed Chaga as a superior class herb, because of its diverse and complete health-enhancing properties.

The entry reads "A Precious Gift of Nature" and "The King of the Herbs". For centuries, people have used Chaga as a daily supplement for the overall balancing of the body's immune system and promoting good health even for those of advanced years. 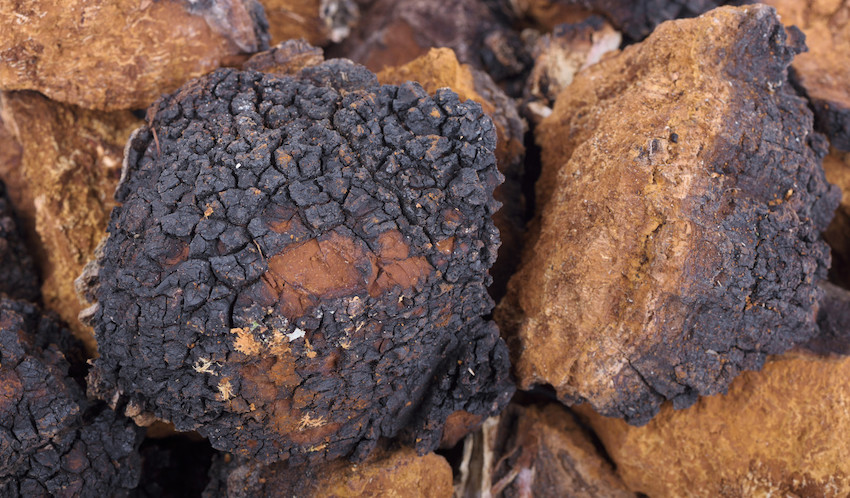 Historically, some Russians drank Chaga as a daily beverage just as we do coffee or tea.  Today, Chaga tea is commonly used in Russian cultures as a family cupboard product to support a healthy immune system. Early Russian culture embraced the use of Siberian Chaga, and its use has spread westward to the Urals and Baltic regions of the European continent.

In the 12th Century, Tzar Vladimir Monamah was reportedly treated with Chaga to maintain his health. Siberian Chaga, received acclaim and notice by the Western world when Nobel Prize-winning Russian novelist Alexandr Solzhenitsyn introduced it in his 1968 novel, The "C" Ward, where he talks about the tea from the birch tree mushroom and its beneficial properties.

According to thousands of years of testing by Chinese Health Practitioners, mushrooms including Chaga can help to increase longevity, promote health, and boost life energy or "Chi."  The biochemistry of these mushrooms is complex and is still being studied.  After 40 years of research, the publication of hundreds of clinical, in vivo and in vitro studies, research science is only beginning to understand the life and health-enhancing properties of the class of superior mushrooms. 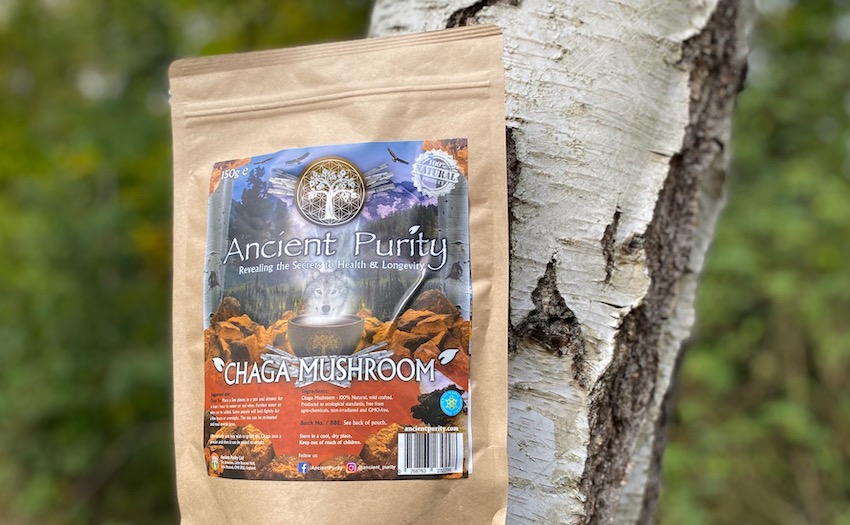 Re-Wild Yourself and Drink Chaga Tea 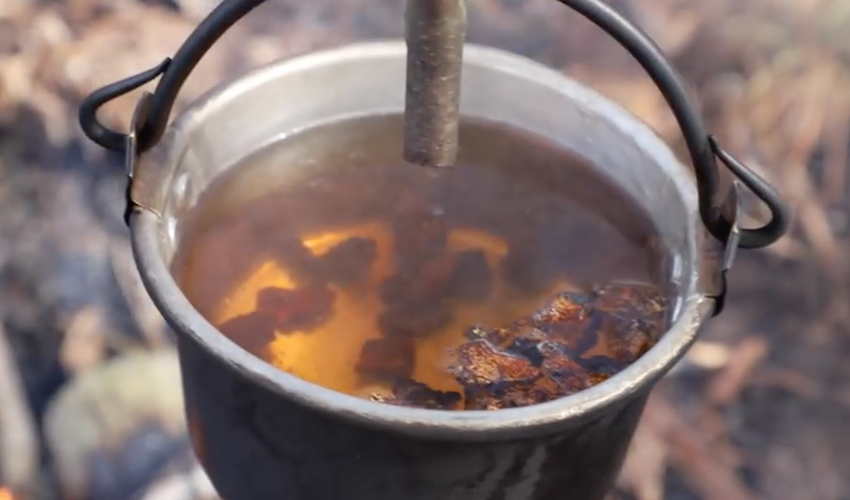 Other uses:
You can also use the Chaga tea for enemas if desired. You will find many different methods to use Chaga on different sites.
We highly recommend David Wolfes book "Chaga" King of the Medicinal Mushrooms.

Q - Some people are selling Chaga powder is it better?
A - We prefer to take it straight from the tree and let you use it as see fit. You could grind/mill it then use, its debatable how this effects Chaga, just as for example went using a centrifugal juicer on vegetables, the cutting can effect the enzymes. We have no proof of the but at Ancient Purity we like our Chaga in chunks, so that how we provide it.
- Health Refugee

Q - How many times can i re-boil a piece of Chaga?.
A - Personally, i will 3 or 4 times, but i tend to then just add new pieces to the pot rather than throw an old bit away. - Health Refugee

Q - I have a major health issue, how should i use Chaga?
A - We recommend David Wolfes book "Chaga" King of the Medicinal Mushrooms.