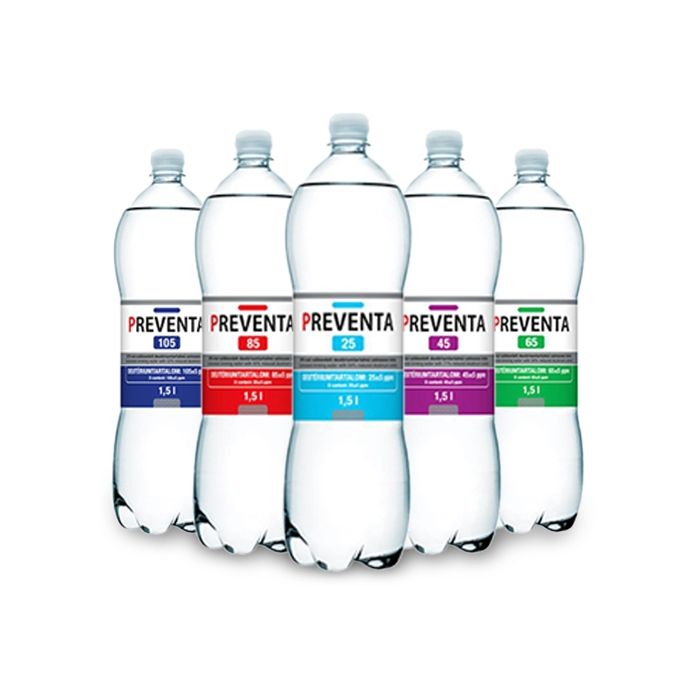 Deuterium is one of the hydrogen isotopes and is found in a proportion of 150 parts per million in all water. The low deuterium content in glacial water many thousands of years ago demonstrates that water did not always have such a high concentration of deuterium. Deuterium, (heavy hydrogen) is a naturally occurring stable (non-radioactive) variation of hydrogen. The atomic nucleus of hydrogen consists of one proton only, but the deuterium nucleus contains one proton and one neutron. This considerable, twofold mass difference causes significant differences in the physical and chemical properties of hydrogen and deuterium. Preventa presents the world’s first bottled drinking water with lowered deuterium content, was developed on the basis of an international patent by HYD LLC. Preventa drinking water was licensed by the Budapest Veterinary Health and Food Control Station in 1999, based on the expert opinion of Fodor József National Centre of Public Health, Institute of Environmental Health, and National Institute for Food and Nutrition Science.

Research has shown that decreasing deuterium levels in the body's tissues and organs is a natural biological process. However, our body's ability to deplete deuterium decreases as we get older, sicker and get less exercise or sunlight. This natural system is the target of the deuterium depleting procedure. By changing the deuterium level of drinking water below the natural level, the deuterium content in the body can be kept low even if the said natural cell process is faulty. By proper choice and continuous consumption, deuterium depletion in the organism can be maintained for long periods. Deuterium-depleted water is produced by an energy-demanding technology based on differences in the physicochemical properties of normal water (H2O) and heavy water (D2O). Due to a boiling point difference of merely 1.5°C, the concentration of heavy water (with a higher boiling point) is lower in the vapour phase and this fact is utilised for producing deuterium-depleted water. By repeating evaporation several times in so-called distillation columns, the deuterium content of water can be reduced to any level. 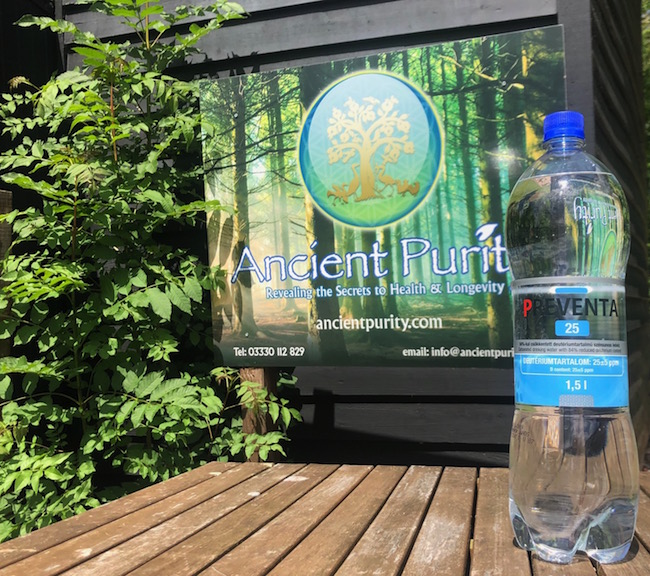 Deuterium can have kinetic isotopic effects different than hydrogen has, and the physical and chemical properties of the deuterium compounds differ from those of hydrogen compounds. For example, D2O (heavy water) is more viscous and heavier than H2O (normal water). Heavy water is approximately 10% denser than normal water, enough for the ice formed of heavy water to sink in normal water.

The differences in connection energies and lengths of hydrogen isotope compounds are greater than the isotopic differences for any other element. The bonds between deuterium and tritium are stronger than those with hydrogen, these differences were enough to produce important changes in biological reactions.

The low deuterium content of the water gives it therapeutic properties at cellular and DNA levels, slowing the ageing process, lowering the appearance of cell division defects and improving the immune system.

It has been shown that higher concentrations of heavy water has a fatal effect on fish, amphibians and insects. Experiments conducted on rodents showed that a high level of deuterium of as much as 25% in the body water causes sterility because neither the gametes nor the zygotes can develop. Small mammals such as rodents die after approximately a week of consuming heavy water. The cause of death is similar to that of cytotoxic poisoning (the case of chemotherapy) or acute radiation syndrome.

The right DDW for you... The lower is the deuterium content of a given Preventa water, the farther it is from that of the natural waters which is 140-145 ppm in our climatic zone. By proper choice and continuous consumption, deuterium depletion in the organism can be maintained for long periods.

The human body consists prevailingly of water, but the proportion of water decreases with age. Considering that ca. 60% of our body is water, and that organic compounds also contain deuterium, the concentration of deuterium in the human organism is severalfold higher than the normal level of other physiologically important elements such as calcium, potassium or magnesium.

Athletic Benefits of Preventa... In a sports medical test, the effect of Preventa deuterium-depleted drinking water on the performance of top athletes was investigated, together with an investigation of effects on metabolic processes, primarily glucose metabolism and acid-base balance, concomitant with the physical load. Twelve international-level male rowers participated in the study, of who 7 athletes consumed 2 liters of deuterium-depleted drinking water (Preventa® 105) for 44 days, while 5 athletes drank ordinary tap water. Both groups had the same preparatory training. On day 0 and day 44, both groups underwent a multistage load test.

The results indicate that, after DDW consumption, the athletes performed the load stages with lower blood lactate levels, which possibly means that the cells became anoxic less or later on physical load, or lactate elimination was improved. The examination results were concordant with the athletes’ subjective experiences, namely that after drinking DDW, they had improved performance, regenerated faster, and had better stamina on bodily load. DDW may thus be suitable for improving the performance of the organism in situations with an increased physical load.

The deuterium content of waters, with minimal fluctuations: In the temperate climate area – 150ppm (parts per million) D/(D+H), Equator – 155 ppm, Northern Canada – 135 ppm. The deuterium quantity in water varies not only with latitude but also altitude (with values ranging between 150 ppm at sea level and 130 ppm at heights above 3000 meters).

The deuterium quantity measured in the organisms that live in a certain geographic area is proportional to the deuterium concentration of the water in that area. 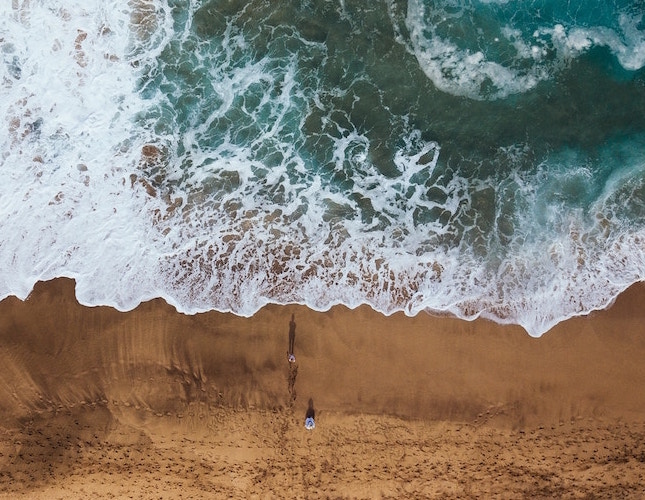 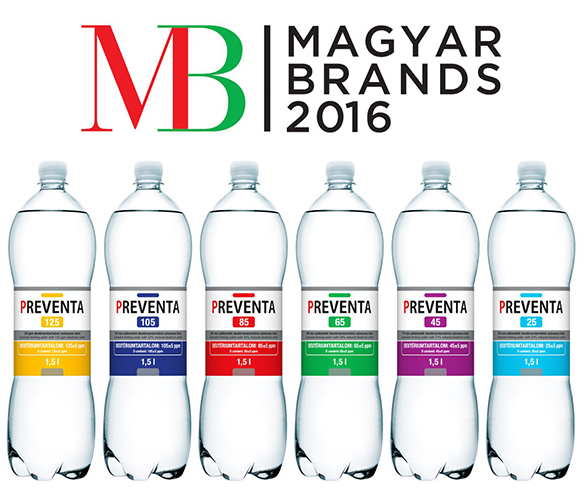 Ancient Purity works with Preventa because they ensure the quality of the raw material (DDW) and their deuterium-depleted waters, protected by international trademarks, in partnership with independent academic and pharmaceutical laboratories. The deuterium-concentration is measured by the Institute for Geological and Geochemical Research of the Hungarian Academy of Sciences, the pharmaceutical grade microbiological purity is verified and certified by an independent accredited laboratory.

HYD Ltd. also performs deuterium-concentration measurements by validated measurement process with laser water isotope analyzer in accordance with current GMP (Good Manufacturing Practice) regulations. The results of the measurements are recorded, retained and archived, therefore Preventa products can be traced back for years.

About Preventa and Deuterium Depleted Water Developments and Research

In the spring of 2016, Preventa modernised the manufacturing technology that also affects the properties of the added natural mineral water. The bottling facility, equipped with all the modern technical apparatus, and the highly trained, skilled staff provides our products with impeccable quality. The source of the natural mineral water, added and mixed to the low deuterium content water component in order to ensure the desired concentration of deuterium, comes from a new water base. The currently used mineral water was formed in the Pleistocene, following the Ice-age. Thickness of glaciation within the Carpatian Basin increased to several hundred meters. The alternation of glaciation and warming in the Carpathian Basin surrounded by mountains eroded the latter, which led to continuous choke up of the basin.

In the area fluviatile deposit sand was formed with calcareous structure, entombing the water stock of retreating glaciation. This process was repeated tens of thousands of years, more and more layers accumulated above the water base, and by the end of halocene era deep in the Earth remained 16 layers of clay coating, waterproof water aquifer, including the water supply of Glacial era. Thanks to its ideal chemical components it can be consumed in all ages and without any quantitative limitation. Its slight alkalinity (pH 7.45) is due to the value of the optimum soil structure bicarbonate. The mineral calcium magnesium ion ratio is also optimal, which also plays a physiologically important role. Ancient Purity hope that the quality of the world's first Preventa deuterium-depleted drinking water continues to meet the highest standards, we always search for the best and right now thats Preventa. Preventa® deuterium-depleted drinking water product line was awarded the MagyarBrandshonorable award in the Outstanding Consumer Brand category in 2016. 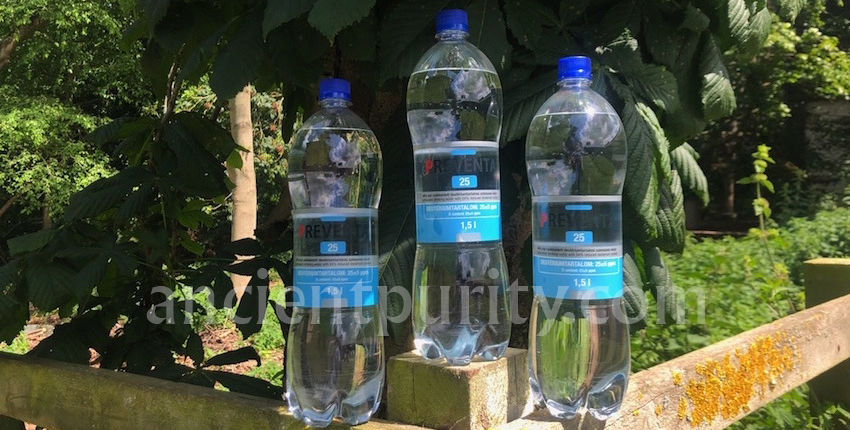 NOTE: It is important that the intake of fluid with normal deuterium level (tap water, mineral waters, soft drinks, fruit juices, milk) should be minimised.

Q - Is there a way to produce home-made deuterium-depleted water?
A - You can achieve a little deuterium depletion with home distillers, not more than 1 ppm decrease can be achieved by single, or 2-3 ppm by double distillation, and this is insignificantly little change in the deuterium concentration of water. Substantial decrease of deuterium content in water can be achieved only by an industrial scale technology, fractional distillation. Preventa products contain 15 to 84% less deuterium than natural waters, whereas home distillers alter the deuterium content of water by a mere 1-1.5%.